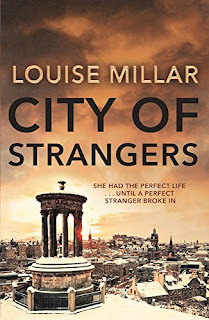 This superbly crafted thriller takes its inspiration from the subject of identity. It centres on the fact that everyone who knows Lucian Grabole, a man who was found dead in an Edinburgh flat, describes him differently to the reporter who is trying to find out about him. Other issues of identity also arise. First, Grace Scott, the reporter and central protagonist, is struggling to find herself professionally, after being with her first love for years and always putting his needs before her own. Then there is her new husband, Mac, who thinks Grace is somebody that she very obviously is not and seems to be struggling with a concept of marriage that is at odds with the person he is married to. Both characters are very likeable, decent people but at times their relationship makes you want to scream at them in frustration.

Interwoven with Grace’s journey of discovery, is another story that is also about people who are searching for answers. Crime reporter Sula McGregor and her new assistant Ewan, are following up on the discovery of a body found stuck down a well shaft on an Edinburgh hillside. Initially unknown, the body is later identified as a missing hill-walker but things get even more confusing when a second body is also found in the well. Sula and Ewan uncover a nasty plot of lies and deceit and nothing is as it first seems.

Ewan knows Grace from their time at college together and it is he who encourages her to pursue her story and realise her dreams with something big. Her search sends her to Amsterdam, Paris and Copenhagen before taking her back to Edinburgh, where she started. What she finds is a totally unexpected, but wonderfully complex, nightmare that will give the reader chills.

Louise Millar is a first-rate author who started her career as a journalist with several well-known magazines, including being senior editor at Marie-Claire. CITY OF STRANGERS is her fourth book and is a page-turning stunner.