The sixth book in Nicola Upson's series featuring Josephine Tey will be out in June. It's called London Rain and is published by Faber. This is one of my favourite series and I do have a slight preference for the books set, like this one, in London, such as An Expert in Murder and Two For Sorrow. 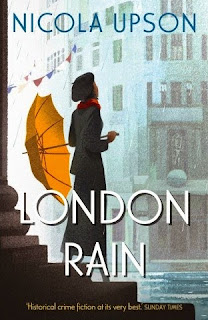 Bestselling writer Josephine Tey is in town to oversee a BBC radio production of her play, Queen of Scots - but adultery, treachery and pent-up jealousies stalk the corridors of Broadcasting House.

At the height of the Coronation celebrations, Detective Chief Inspector Archie Penrose is called in to investigate the murder of one of the BBC's best-known broadcasters. A second victim - his mistress, and the play's leading actress - suggests that the motive lies close to home, but Josephine suspects that the killings are linked to a decade-old scandal.

With Archie's hands tied by politics, and his attention taken by another, seemingly unrelated death, it is left to Josephine to get to the truth. As her relationship with Marta Fox reaches a turning point, she is forced to confront at first-hand the deadly consequences of love, deceit and betrayal.

Rich in the atmosphere of coronation London and the early days of Broadcasting House, the sixth novel in Nicola Upson's 'Josephine Tey' series sets an audacious, deeply personal crime against the backdrop of one of the most momentous days in British history.

Josephine Tey was the pen-name of Elizabeth MacKintosh (1896-1952). Born in Inverness, MacKintosh lived several 'lives': best known as Golden Age Crime Fiction writer 'Josephine Tey', she was also successful novelist and playwright 'Gordon Daviot'. Originally trained as a P.E. teacher, she returned home to keep house for her widowed father. Tey's novels include The Franchise Affair, Brat Farrar, and the unique Richard III mystery The Daughter of Time - once voted the best crime novel of all time. Her work was adapted for radio, TV and film, most notably by Alfred Hitchcock. Meanwhile, as 'Gordon Daviot', she wrote smash-hit play Richard of Bordeaux, making a star out of her leading man, John Gielgud. She worked with actors such as Laurence Olivier, and was friends with many of the stars of London's 1930s Theatreland. At one point, she had plays on simultaneously in the West End in London and on Broadway, and even wrote for Hollywood - all from her home in the north of Scotland. Romantic yet practical, Josephine Tey was a fascinating woman who led a life full of contrasts. Genuinely modest, the full scale of her achievements, and her significance to Scottish fiction, has not been recognised until now.