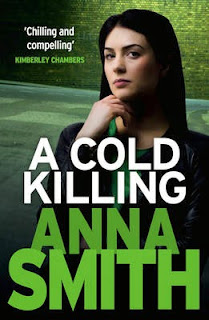 Another, long-awaited novel, featuring my favourite, feisty crime reporter, Rosie Gilmour. There seems to be no end to Anna Smith’s talents and she has produced yet another brilliant book that grabs your attention and doesn’t let go. This is her fifth book about Rosie’s fight to expose the truth in her Glasgow-based newspaper and it is even more attention grabbing than her earlier offerings. Smith is herself an award-winning journalist, and you wonder just how much of herself is written into her excellent character. There seems to be no end to the lengths that Rosie will go to for a good story and she frequently has to go into hiding – from the good guys as well as the bad – after her headlines hit the front page.

A COLD KILLING is no exception. Rosie has just come back from spending some time hiding in Bosnia, after being put on a hit list by some unpleasant characters that tried to kill her in her last outing. Almost as soon as her plane lands on UK soil, she finds herself up to her neck in another investigation. A retired academic is shot, in an apparent execution, while sitting in a cafe with a friend. Hot on the heels of a good story, Rosie soon discovers that the elderly gentleman is a lot more interesting than was initially thought. She also finds out that a mystery woman has been seen fleeing from the scene, close behind the men who carried out the shooting. Finding out the identity of the woman and the reason why she was in the café could possibly hand Rosie one of her best stories yet. The only trouble is that you get the feeling she might just be putting her life on the line in the process. Again.

I love to read novels that have strong female protagonists and Rose Gilmour is up there with the best of them. She is brave, independent, loves what she does and is prepared to do anything to get the stories out. Smith is also an excellent wordsmith and her stories are wonderfully crafted, as well as being exciting and gripping. I always enjoy books by this author and am already impatient to see what she will publish next!