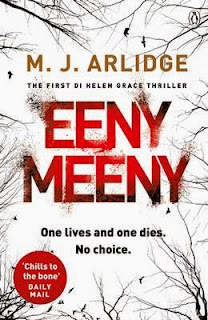 This debut novel from M J Arlidge was absolutely astounding, one of the best stories that I have read so far this year and very likely to be included in my top five books of the year. The plot was very absorbing and I was truly gripped until the breathtaking conclusion.

A young couple awake, very disorientated, trapped and days without food or water. There is no escape. Instead there's a gun loaded with a single bullet and a mobile phone with charge enough only to deliver a short message: when one of you kills the other, the survivor will walk free.

Southampton Detective Inspector Helen Grace is assigned the case and has to interview Amy, the girl who killed her boyfriend Sam, in order to escape the hellish captivity of nearly two weeks. Amy is very thin, filthy dirty and feeling very subdued and guilty because she has killed. She says that she and Sam had been abducted by a woman who had drugged them. Helen accepts her story and soon there are other couples being kidnapped, starved and then given unacceptable choices.

How can Helen and her team track the perpetrator of these dreadful crimes?

This compulsively written police procedural races on to the exciting conclusion. The author, who is male, has worked in television for the last fifteen years specialising in high-end drama productions. For the last five years, Arlidge has produced a number of crime serials for ITV and is currently working on a major adaptation for BBC.

This absolutely sensational story introducing the damaged detective, DI Helen Grace to readers has been followed by two other stories, with the fourth, LIAR LIAR, due for publication in September 2015. So I have three other exciting stories to look forward to from this very gifted author. Extremely well recommended.