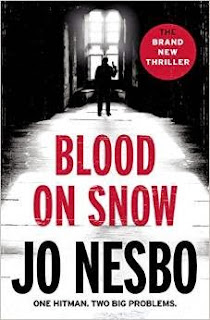 BLOOD ON SNOW, expertly translated by Neil Smith, is a shortish noir tale featuring Olav, a dyslexic hitman. Set in Oslo in 1977, Olav works for Hoffman, one of two powerful men, the other being the Fisherman, jostling to run the drugs trade. Olav has already killed several of the Fisherman's men and then he is given a special task by his boss – to kill his boss's wife. Once he claps eyes on her however, things are not going to go to plan for she is gorgeous and Olav is instantly smitten.

As usual with Nesbo, the plot mechanics are pitch perfect, where everything has a place and a later use – eg the whiskey bottle in PHANTOM. Olav, despite his career, is fairly likeable and is more intelligent than he might try to make you believe. Despite his reading handicap he has absorbed a lot of information from library books and yet is unable to drive a car without attracting attention from the police. Interspersed with the contemporary plot are details about Olav's childhood and also his killing career.

This is a brisk read with its snappy sentences and plentiful dialogue, and contains some black humour. It's also incredibly cinematic, with a great set piece in a crypt, and indeed the film rights have been bought by Warner Brothers. I'm intrigued as to what November's BLOOD ON SNOW 2: MIDNIGHT SUN will bring.
Posted by Karen (Euro Crime) at 9:30 am