Review: The Mystery of Tunnel 51 by Alexander Wilson 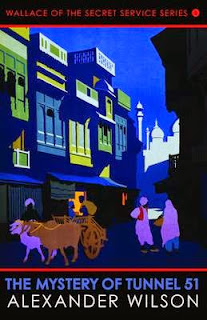 Alexander Wilson's historical espionage thriller was an absolutely spellbinding book and once started I could not put down. The plot is very exciting and leaves you wanting to race to the end to discover what happens to the main characters.

British officer Major Elliot is carrying some top secret documents in a file under his shirt. It is necessary for him to carry these vital despatches to Delhi to pass onto the Indian Viceroy, the most senior British official in India under the British Raj which was the system of government in the country until 1947. He had been advised to travel by road with an escort, but ruled it out in favour of a motor rail car. He has already experienced one attempt on his life by Russian agents who hoped to seize the documents and is keen to get them to Delhi as soon as possible.

Accompanied by three companions, he boards the motor rail car at Summer Hill Station, Simla and they begin their journey to Kalka, the first stage of the journey to Delhi. The journey to Kalka, entails travelling through 102 separate tunnels, some are short, one or two quite long and all are numbered. The longest is number 51 and whilst travelling through it the one light bulb of illumination goes out and the carriage is instantly shrouded in darkness. When the light finally comes on, the travellers are  horrified to discover that Major Elliott is dead from a stab wound! The three companions, Sir Henry Muir, Private Secretary to the Viceroy, Captain Williams an army officer known to both Muir and Elliott,  and a police officer are the only other passengers in the car.

Sir Henry Muir journeys on to Delhi by road with the plans and passes them to the Viceroy. They are completely baffled as to how Elliott was murdered and determined that the assassin was after the plans but they had been recovered? They examine them and discover that they are blank sheets of parchment, so they have been stolen after all. Immediate orders are given to stop any Russian agents from leaving the country with the plans. They realise that the police do not have the expertise to solve the case and decide that an intelligence expert is required and the Viceroy of India decides that Sir Leonard Wallace, the Head of Intelligence in London is just the man for the job.

They cable Sir Leonard and he agrees to come, together with his top agent, in his aeroplane with two pilots and his manservant Batty and they make a rapid flight over. Sir Leonard and his agent Major William Brien have many exciting adventures together before the fascinating conclusion.

Alexander Wilson was a writer, soldier and a spy. In the Second World War, Wilson worked as an intelligence agent. A highly acclaimed author during the 1920s and 30s, Wilson's characters are based on his own fascinating and largely unknown career in the Secret Intelligence Service. This book was originally published for the first time in 1928 and Allison & Busby have decided to republish this book now as the first of nine books in the Wallace of the Secret Service series. He was a hugely popular and well-reviewed author of the Golden Age of mystery fiction. I was gripped all the way through and enjoyed the work tremendously. Well recommended.