Paul Johnston is returning to Quint Dalrymple after a gap of 14 years with Heads or Hearts being published by Severn House this month.

Heads or Hearts is the sixth in the series with the first book, Body Politic, having been released in 1997. 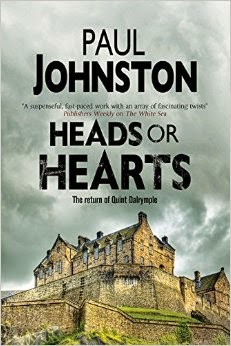 Publisher's blurb: Maverick ex-cop Quint Dalrymple returns to investigate a series of gruesome murders in a near-future independent Edinburgh. Independent Edinburgh, 2033. The Council of City Guardians has been forced to relax its grip on citizens and the borders are no longer secure. Then a human heart is found on a football pitch. Maverick investigator Quint Dalrymple is called in - but before he makes much progress, a citizen's headless body floats down a canal. Quint uncovers a link to the planned referendum over Edinburgh joining a reconstituted Scotland. But who is behind the killings and mutilations? Are the city's notorious gangs responsible, or does the solution lie with the rulers of Edinburgh and other former Scottish states? Quint must dig deep to save the Council from collapse, and to retain both his head and heart...