Review: No Other Darkness by Sarah Hilary 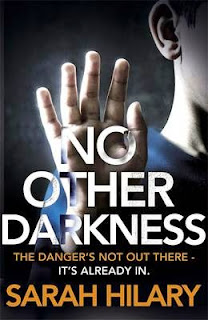 This is the second novel from Sarah Hilary, following on from her highly successful first novel featuring DI Marnie Rome, SOMEONE ELSE'S SKIN.

This time, Marnie is faced with the task of how two small boys met their death in a bunker. Mr Doyle discovers their bodies when digging at the end of his garden, to make a vegetable patch. He lives with his family in a newly built house, has two children, with a third on the way, and is fostering a difficult fourteen-year-old teenager called Clancy.

Who are the children? How did they end up in the bunker? DNA testing only shows familial DNA present in the bunker, and this doesn’t help to identify the children. How were the homes built, without anyone knowing about the bunkers? Or did the builders, Merrick Homes, know about them, and could they have something to do with the buried children? And who is Alison/Esther, an inmate at Lawton Down Prison, about to be released on license, a character that appears in interspersed chapters. She clearly bears a huge guilty conscience for something, even though she has already been punished, by being locked up in prison.

Marnie’s first task is to try to discover the children’s identity, as this may throw up some clues as to why they were left to die. Eventually, she and her team do work out who they are. Then comes the huge roller-coaster of clues, with twist and turns, as DI Rome and her team try to work out who is telling the truth, and who is lying, until eventually they work out the unhappy truth, partly revealed through a the climactic ending.

Once again, Sarah Hilary has managed to pull together a well plotted novel, and DI Marnie Rome makes for a tenacious detective.