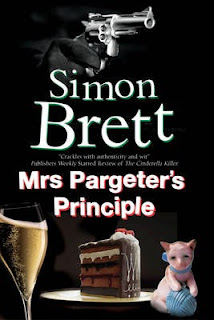 This is the seventh of the Mrs Melita Pargeter novels by Simon Brett and is published seventeen years after the last one, MRS PARGETER'S POINT OF HONOUR.

Mrs Melita Pargeter has always made it a point of principle that she should complete any of her late husband's unfinished business. Therefore, she finds herself attending the funeral of the rich and respected Sir Normington Winthrop not because she knows him personally but because he is one of the names in the little black book bequeathed to her by her husband, detailing all the people who ever worked for him with details of their particular skill sets. But what exactly was the connection between Mrs Pargeter's late husband and Sir Normington? The investigations of Mrs Pargeter and her associates draw her into a shady world of gun-runners, shifty politicians - and a kidnapped vicar.

I read this very quickly as I do for most Simon Brett books which I find an absolute joy to devour. There is a good solid plot here where you can usually work out what is going to happen but part of the fun of the Mrs Pargeter books is finding out how it happens. That, however, is just a small part of the enjoyment of a Mrs Pargeter book – the main part is the characters. The associates of the late Mr Pargeter (and now their children) are realistic up to a point but have a light comic twist – Mrs Melita Pargeter herself is a force of nature who has huge loyalty to her late husband’s memory although she might just suspect that not everything he did was entirely within the letter of the law.

If you like your crime novels with minimal violence and a hint of comedy then I would give the Mrs Pargeter novels a try.