Review: The Boy in the Shadows by Carl-Johan Vallgren tr. Rachel Willson-Broyles 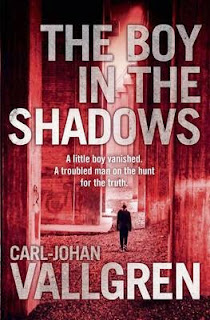 THE BOY IN THE SHADOWS is Swedish literary author Carl-Johan Vallgren's first crime novel and indeed looks to be the first part in a series.

The prologue set in 1970 describes the disappearance/kidnap of a seven-year-old boy at a crowded Stockholm train station when he is separated from his father and younger brother. The rest of the story is set forty years later.

Danny Katz is a former drug addict with a facility for languages and computer hacking which the military have put to good use. Now a civilian he is self-employed and receives some business help from his old military superior Julin. Katz is contacted by the beautiful Angela the wife of an old translator colleague, Joel, from the rich Klinsberg clan. Joel and Katz, though not friends, shared a dorm and Joel told his wife that Katz was the only person he could trust. When Joel goes missing, Angela contacts Katz and though he is not a PI he agrees to look into Joel's disappearance. Joel has recently received some clues that might uncover the mystery of his brother's kidnapping all those years ago...

Katz has some contacts and begins to trace Joel's last journey but it is not long before he finds himself having to disappear when he's suddenly framed for murder...

This first part of the book, about 100 pages, lured me into thinking we have a GIRL WITH THE DRAGON TATTOO, cold case type mystery to solve however things strike off in much more of a thriller direction with Katz going underground and trying to turn the tables, on those framing him. In addition the narration switches between Katz and Eva, a friend from Katz's youth home days. They both had a rough start to life and have had some personal and professional successes but cannot shake off their inheritance. With its threads involving conspiracies, blackmail and voodoo it is a slightly fantastical tale but is none the less gripping for it and though it didn't go the way I perhaps wanted it to it was an involving read. The main characters are for me its strongest suit and I'm pleased that we may meet Katz and Eva again.

The (surprisingly) uncredited translation is by Rachel Willson-Broyles.
Posted by Karen (Euro Crime) at 9:30 am

This does sound interesting, Karen. And I know what you mean about characters being the strongest part of a novel. Glad you thought this was a good read.