The return of Jan Costin Wagner

I'm so excited about this one. Jan Costin Wagner wrote the haunting Ice Moon which was a big hit with the Euro Crime team a few years ago. At long last a sequel is being published in English in August, translated by Anthea Bell - Silence.

NB. Cover and blurb are taken from the Harvill Secker catalogue and may not represent the final product. 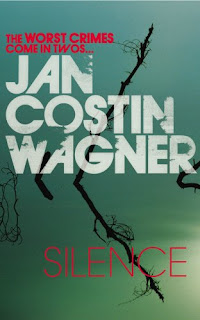 One ordinary summer’s day a young girl disappears while cycling to volleyball practice. Her abandoned bike is found in exactly the same place that another girl was assaulted and murdered thirty-three years previously. The perpetrator was never brought to justice so the authorities suspect the same killer has struck again. The eeriness of the crime unsettles not only the police and public, but also someone who has been carrying a burden of guilt for many years...

Detective Kimmo Joentaa calls upon the help of his older colleague Ketola, who worked on the original murder, in the hope that they can solve both cases. While they are following up leads, the ripples from the impact of the new disappearance spread and Kimmo discovers that the truth is not always what you expect.
Posted by Karen (Euro Crime) at 9:16 pm

Oh Karen, thanks for this news! I am so excited about this one, can't wait to read it.

*Blinks* I didn't realise the sequel hadn't made it into English yet - it's really worth reading. I'm glad to see German crime fiction getting some exposure, even though it's an extremely slow drip compared to other countries. Maybe I'll have to do something about my translation hobby for real...

Has it been out a while Lauren? Is there more in the series?

We've had a new Juli Zeh this year and there's a new Schenkel coming soon but as you say it's a very slow process compared to other countries.

Karen, I bought it in the middle of 2009 in paperback, but I think it was originally published in 2007. There's a third book too, which I haven't yet read - I don't think it's available in regular paperback yet, and I don't normally pay 17 euros plus for crime fiction.

Wagner has actually written quite a few non-series books, but they haven't had anywhere near the coverage. They're all on amazon Germany, but I can't say I've seen them in a shop.

I think German books have to be quirkier or more gory to make it into English. There's a lot of perfectly good series along the lines of the Scandinavian hits, but there's no move to translate most of them. (Jan Seghers is my favourite at the moment.)