My first panel of the day - I Fought the Law: Authors who write both crime fact & fiction, chaired by Martin Edwards who, though he claims not to be a morning person, led an interesting and lively panel.

Dan and Martin after the panel: 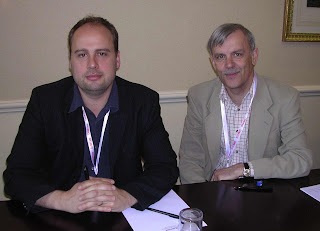 Of particular interest to me was the fact that Diane Janes's book, The Pull of the Moon, is partly set in Birmingham. Regular readers of this blog might be aware of how unusual this is. Alison Bruce's series has been on my radar for a while as it's set in Cambridge, another of my favourite settings. Dan Waddell has agreed to visit my library to give a talk at an unspecified date as yet but I look forward to hearing more abut his genealogy book and crime series. He introduced the panel (and audience?) to the term "psychogeograhy" when talking about how Rillington Place has been obliterated, rebuilt and renamed but without a number 10. Martin said that Crippen's house was demolished in the blitz but there are similar houses around that he could look at for his book on Crippen. Frances Brody shared a story on how she went to Headingly to find a house for her main character and how the current owner was a bit suspicious about her and didn't offer a tour inside. (Her next book is set in Harrogate). Zoe Sharp won the goody bag for the most interesting question, asking the panel what was the most unusual fact they'd found during their research. Dan said that he's read that a stupid surname shortens life expectancy but he hasn't been able to find any scientific evidence to corroborate the claim!
Posted by Karen (Euro Crime) at 10:51 am

Sounds like super fun and I'm going to have to add these authors to my list to watch for here in the states. I love Dan Waddell, by the way. His books are fantastic reads.