I've just added a new-to-me Spanish author to the Euro Crime database. Telegram Books appear to be translating Eduardo Mendoza's trilogy about a detective in a mental asylum: The Mystery of the Enchanted Crypt was published in October 2008 and the follow-up, The Olive Labyrinth, is scheduled for October 2011. 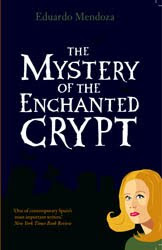 Released from an asylum to help with a police enquiry, the quick–witted and foul–smelling narrator delves deep into the underworld of 1970s Barcelona to investigate the mysterious disappearance of a teenage girl from a convent school.

Helped only by his ageing prostitute sister and the voluptuous nymphomaniac, Mercedes, the narrator's investigations take him deeper into a mystery involving murdered sailors, suicidal daughters, a web of organised crime and a secret, underground crypt. 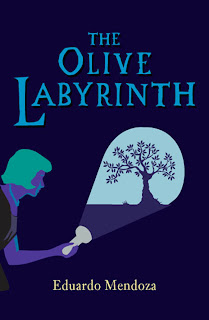 Our hero, Gonewiththewind, has once again been released by the police from a lunatic asylum in Barcelona. The last time he helped solve the mystery of an enchanted crypt and a missing girl, only to find himself once more incarcerated. This time his mission is to recover a briefcase filled with money lost under very peculiar circumstances …

Mysteries and mishaps follow each other at breakneck speed, as the hapless detective delves beyond humour and the absurd to the frontiers of the truly surreal.

A brilliant send-up of the detective genre and of Spanish society, The Olive Labyrinth promises to have you in stitches.

Both titles are translated by Nick Caistor.
Posted by Karen (Euro Crime) at 9:09 pm

Karen - These sound absolutely fascinating! Thanks for sharing them. I'm fortunate in that I speak Spanish pretty well, so I'll have to try to find these : ).

Karen - Thanks for sharing this information. Eduardo Mendoza is one of the best Spanish writers now-a-days. I read the three books when they were published in Spain, very funn, in my opinion, and an excellent parody of the genre.

I hope you can find them Margot. These UK covers look a bit "Nancy Drew" I thought!

Jose - thanks for the recommendation, they sound unusual and well worth seeking out.

yes, these definitely sound good, and good to know that Jose recommends them. I shall make a point of trying the first one. Thanks for pointing them out!