I've noticed a few crime books passing through my hands at work with a football theme: 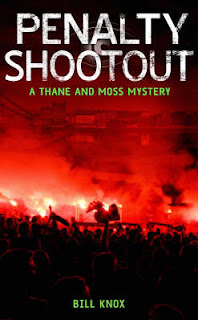 Penalty Shootout by Bill Knox (2007 edition*)
The suspicious death of a second-hand car dealer at a model-railway exhibition seems a fairly routine case for Glaswegian detectives Thane and Moss. But this time the arrival in the city of a horde of international football fans for a big game complicates matters. The duo struggle to piece together the evidence against a backdrop of confusion and violence and find a trail that leads to an art robbery of unparalleled magnitude. 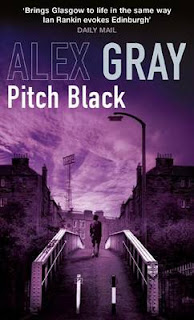 Pitch Black by Alex Gray
When Chief Inspector Lorimer returns from his holiday on the island of Mull, he feels a welcome sense of calm. But it doesn't last long. Kelvin FC's new star midfielder is found brutally stabbed to death in his own home and, with his wife apprehended trying to leave the country, a seemingly straightforward new case begins. But the grisly murder of a referee after a Kelvin match throws light on some dark secrets at the ground. And when the latest signing to the club becomes the latest victim in a string of killings, Lorimer knows there's a serial killer on the loose - one that's only beginning to show his true colours. As lies emerge and tensions build, the players and managers live under the constant threat of becoming the next Kelvin fatality. 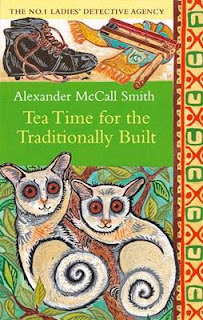 Tea Time for the Traditionally Built by Alexander McCall Smith
It is a troublesome fact on which even Mma Ramotswe and her assistant Mma Makutsi agree: there are things that men know and ladies do not, and vice versa. It is unfortunate, for example, when Mma Ramotswe's newest client is the big-shot owner of the ailing Kalahari Swoopers, that one thing lady detectives know very little about is football. And when the glamorous Violet Sephotho sets her sights on Mma Makutsi's unsuspecting fiance, it becomes exasperatingly clear that some men do not know how to recognise a ruthless Jezebel even when she is bouncing up and down on the best bed in the Double Comfort Furniture Shop. In her attempt to foster understanding between the sexes and find the traitor on Mr Football's team, Mma Ramotswe ventures into new territory, drinks tea in unfamiliar kitchens and learns to trust in the observational powers of small boys.

Going further back, the Classic Crime Fiction website has a dozen or so books football related crime novels from the 1940s and on. 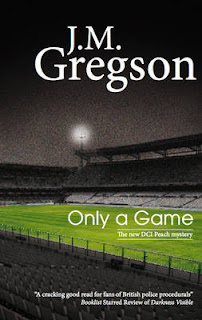 Only a Game by J M Gregson
Foul play’s afoot at Bruton Rovers Football Club.
Bruton Rovers FC has been promoted to the Premiership, but Jim Capstick’s days as Chairman have made him some enemies in the Lancashire mill town. With the team fighting relegation, the debts are piling high. But when the club is rocked by a murder after Jim makes a surprise announcement, the question’s not who had the motive, but who had the balls to actually do it. ‘Percy’ Peach and DS Lucy Blake have their work cut out for them . .

Putting the Boot In by Dan Kavanagh (reprinted in 2014)
Things are hotting up in the Third Division and it seems someone's nobbling players. Following the loss of one of his best strikers, Jimmy Lister, former England player and now ineffectual club manager, calls on the expertise of Duffy. Enter London's most unusual investigator. An ex-policeman with razor-sharp wit and an interminable sexual appetite, Duffy must investigate the murky world of lower-league football. He soon finds himself grappling with neo-Nazism and vicious sabotage - not to mention the niggling question of whether or not he really is too short to be a decent goalie. As deceit and violence abound, Duffy's set for a difficult game. Warm up's over; it's kick-off time.

January Window by Philip Kerr (2014)
Everyone knows football is a matter of life and death. But this time, it's murder. Scot Manson: team coach for London City FC and all-round fixer for the lads. Players love him, bosses trust him. But now the team's manager has been found dead at their home stadium. Even Scott can't smooth over murder...but can he catch the killer before he strikes again?

Exposed at the Back by Arild Stavrum tr. Guy Puzey (2014)
Norway's most powerful football agent, the charismatic and ruthless Arild Golden, is found brutally murdered. Rumours circulate about infidelity and secret deals, about billions that cannot be traced and stories about talented African footballers who are dumped without papers when they fail to make the grade in the professional game. The lawyer Steinar Brunsvik, a former player for Ajax and the Norwegian national team, as asked to represent murder suspect Taribo Shorunmo. Shorunmo is a former footballer living in Norway without a visa. Brunsvik discovers that his own football career has a connection to Golden's murder and realises he caught in the middle of a dirty game that could prove fatal.

Funny! Do you think this is in view of the upcoming World Cup? Actually, I don't know if it is "upcoming" but it always seems to be, from the number of qualifying games I notice being watched on TV as I pass through.

I remember that movie with Michael Caine and co, about a football match between German prison guards and prisoners in WW2. And another one with Sean Bean - I can't remember anything about it except him, so it probably wasn't a very good film. Neither of them was a crime story, though.

You might be amused to hear that my first-written novel (at age 23) was a football thriller that rejoiced in the title 'Dead Shot'. Fortunately, I was sensible enough never to submit it to a publisher....

You might consider Off Side by Manuel Vazquez Montalban:

”To revive its sagging fortunes, Barcelona soccer club has bought the services of Jack Mortimer, European Soccer Player of the Year. No sooner has Mortimer taken possession of his company Porsche than death threats start arriving. Are they a hoax, the work of a loner or are they connected to the awesome real estate speculation that is tearing Barcelona apart?”
================
Detectives Beyond Borders
"Because Murder Is More Fun Away From Home"
http://detectivesbeyondborders.blogspot.com/

I have a short list today on mysteries that take revolve around the World Cup. http://www.mysteryreadersinc.blogspot.com/2014/06/the-world-cup-murders-short-list.html