Released in the UK on the 7th November is Professor Layton and The Curious Village for the Nintendo DS. (I'm not sure which is the UK cover, but it might be the sober one on the right). 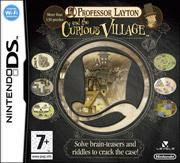 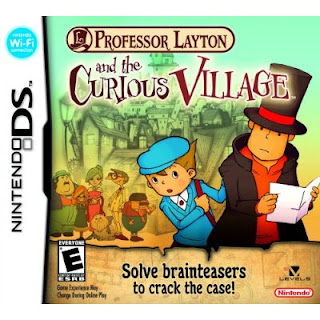 Nominated as one of the top handheld games of the year by the 2007 Japanese Game Awards, Professor Layton and the Curious Village sets players loose in a Victorian dream world as you and your guide, Professor Layton, explore a quirky Victorian village where everything is a puzzle.

Something is Odd in St. Mystere
In the curious village of St. Mystere, townsfolk speak to each other in riddles, lock their doors with sliding puzzles and hide their secrets within brainteasers. When the wealthy Baron Augustus Reinhold passes away, his will reveals a hidden treasure in the village of St. Mystere. Unable to locate the treasure themselves, the baron's family calls upon renowned puzzle expert Professor Layton and his apprentice, Luke, for help. Upon the pair's arrival, their search for the treasure is interrupted by the suspicious death of another member of the Reinhold family. Now with two mysteries on their hands, Professor Layton and Luke must work their way through the village's many puzzles, riddles and brainteasers to find the truth.

* As Professor Layton, players tackle more than 130 puzzles as they unravel the mysteries of the village. Challenges range from mazes and riddles to logic and sliding puzzles, many of which are new for the North American release. Touch-screen controls make working through puzzles a snap for players of all skill levels, and as a special bonus new puzzles are available weekly for download for the first six months following game release via Nintendo Wi-Fi Connection.

* Unlike other puzzle-driven titles, Professor Layton is the first to offer a story, cast of characters and style that are just as strong as the game play. Fully voiced animated scenes bring the story to life, while the funny and eccentric villagers and the classic, hand-drawn art provide a stylish charm that will appeal to gamers and non-gamers alike.
Posted by Karen (Euro Crime) at 6:40 am

Do you think Santa will bring you these, then? ;-)