About a year ago I mentioned Bookchase which according to their website:

Bookchase® is exactly what it says - a chase with books.

Bookchase® is also the world's first board game about books which comes with your own bookshelf, library card, bookshop, and your own set of tiny books to collect. First one to collect six books and head home wins! Simple really.

Bookchase® is a family game which can also be played by adults and is designed for anyone from 5 years upwards. Never read a book? - you could still win. Read all the books in the world? You could still lose. Dare you take the Bookchase® challenge?

Today, I was pleased to see it for sale in my local Waterstone's bookshop along with...Harry Potter Cluedo (aka Clue (US)): 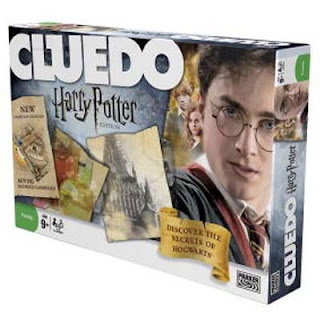 Dark magic has been performed at Hogwarts. A fellow student has vanished from the famous School of Witchcraft and Wizardry—and it is up to you to solve the mysterious disappearance. Play as Harry, Ron, Hermione, Ginny, Luna or Neville and try to discover who did it, what spell or item they used, and where the student was attacked. Was it Draco Malfoy with a Sleeping Draught in the Owlery? Move around Hogwarts making suggestions— but watch out. Wheels on the board actually move to reveal secret passages, hidden staircases, and even the Dark Mark. Think you’ve gathered all the facts you need? Go to Dumbledore’s office to make your final accusation to win the game. Players 3-5, Ages 9+

Online prices start at £19.99 for the Harry Potter edition of Cluedo but several outlets appear out of stock. There was just one copy left in Redditch Waterstone's.
Posted by Karen (Euro Crime) at 2:02 pm

hello every one - hope yous had a nice one - pity we didnt get snow was all prepared wi sledges kids loving it any ways , all the best for 2012 - michael