The BBC4 programme schedule lists two episodes of the Maigret series starring Bruno Cremer to be broadcast next week. According to this website, Cremer filmed 55 episodes between 1991 and 2004. The two showing on BBC4 are nos. 49 and 50, filmed in 2004. 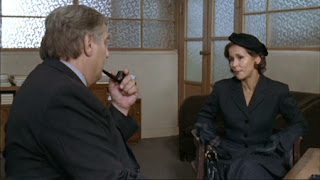 Legendary French sleuth Maigret is called to the Place des Vosges, where the owner of a serum company has been found shot to death while seated at his desk. Behind him the unlocked safe lies empty and Maigret soon becomes convinced that the answer to the robbery and murder lies among the residents of the block of apartments.

And will be followed by Maigret at the Doctor on Monday, 1st December at 22.00: 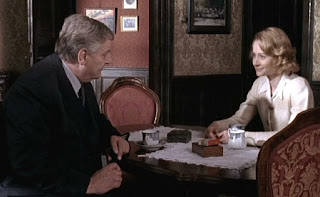 Maigret travels to Neuilly to investigate the mysterious death of a servant girl who had been working at the home of a local doctor. The case takes a dramatic turn when the autopsy reveals a horrific cause of death and that the girl had been four months pregnant.

Each episode is 90 minutes long.

Georges Simenon wrote 75 full length books about Maigret plus some short stories. The twelth in the series is called The Shadow in the Courtyard but there isn't one called Maigret at the Doctor. If anyone know which book Maigret at the Doctor is based on, please do leave it in the comments.
Posted by Karen (Euro Crime) at 10:10 am

Karen it is episode 50 'Maigret chez le docteur', and I will be watching these thanks for drawing my attention to this.
The Michael Gambon Maigret's were very good but I am old enough to remember Rupert Davies in a fantastic series during the 1960s. I think it was black and white!

I got confused over the question and forgot I was looking for the book not the TV program. Sad old man.

Found it.
Karen, it is based on Mr Monday:Inspector Maigret Hesitates.

Here is the link http://www.trussel.com/maig/plots/lunplot.htm