Euro Crime cited on The Outcast

It's long been a secret hope of mine that a quote from a review written for Euro Crime will be used on the front/back/inside of a book and very excitingly, it has come to pass. The new book by Michael Walters, The Outcast, the third in the Inspector Nergui series, features a quote from Maxine's review of The Adversary on the back of the jacket. (Read the rest of her review, here.) 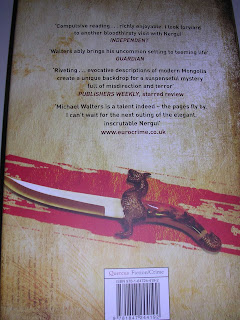 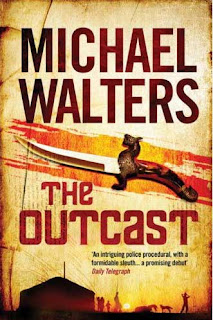 Synopsis: Ulaan Bataar bakes in the heat of an unseasonably hot summer as it prepares to celebrate the 800th anniversary of the birth of the Mongol Empire. But the city is facing a series of unexpected crises - an apparent suicide bomber shot down by police in Suuk Bataar Square, a dead body in the City Museum re-enacting an incident from ancient Mongolian history, an explosion at a political rally, and yet another body found murdered nearby. For Doripalam, now boss of the Serious Crime Team, the crises are growing increasingly personal. As he struggles to keep control of his own personal and professional life, one of his own team is arrested.Solongo, Doripalam's wife is facing her own challenges and finds herself entangled with murder and with the fugitive officer. Worst of all, Nergui, now an influential figure in the Ministry of Security, appears to be pursuing an agenda all of his own. The roots of all this trouble lie in the past - in the history of the Mongol nation, as well as in the more recent legacies of the communist state. As the sun beats down, a chilling figure emerges - a figure from Nergui's past, an outcast, who has returned to exact revenge, both on Nergui himself and on the nation that rejected him.

An excerpt of The Outcast can be read on Michael Walters' website.
Posted by Karen (Euro Crime) at 9:19 am

Congratulations.
I am surprised that other publishers have not used the reviews that appear on Euro Crime.

Not got a copy to hand, but the cover of Final Bet by Hamdouchi quotes the Eurocrime review.

That's interesting Laura. I've mentioned Final Bet on the blog but I was unsuccessful in getting a review copy. A eurocrime doppelgänger?

Congratulations (and thanks for the plug!). Really pleased to have played my small part in this, especially since Maxine Clarke gave 'The Adversary' such a terrific review in the first place and has been a great supporter of the books.

It's well deserved recognition for you, though. It's a superb site and the reviews are always excellent - typically more considered and thoughtful than most of what appears in the mainstream press. As Uriah says, I'm suprised more publishers haven't cottoned on. Quercus look to be ahead of the game, as usual...in fact, at the risk of losing my pioneer status, I think this isn't the first instance. If I recall correctly, the paperback edition of Elena Forbes's 'Die With Me' also included a Eurocrime quote, taken from one of Carla McKay's round-ups.

I feel a bit of a nitwit now, Karen, as I just sent you an email saying "wow, they cited a Euro Crime review of mine on the back of The Outcast" (as the publisher kindly sent me a review copy). Now I've just seen this post so feel like a bit of an idiot - sorry, I am behind on my blog reading.

I think some of the other "quotes" referred to here might not be from the Euro Crime website, eg there is a publishing imprint called Eurocrime and probably other entities with the same title. But, Norman (Uriah), did'd a quote from one of your reviews appear on the publicity for a Bitter Lemon book? (Carofiglio?) Maybe that was before you started writing for Euro Crime?

Anyway, I am very honoured and thrilled to be so cited, and lovely that the publisher put the Euro Crime URL on the book, too. My review of The Outcast to come!

Maxine they used a review of Carofiglio's Reasonable Doubts on their website but not on the book that is the ultimate, well done.

It was a review that did not appear on Euro Crime, and being very modest I happen to have the link right here.

Have now got the Hamdouchi in front of me - it quotes your blog post, not a review:-