Here's one cover I'll be covering up on the train...

The cover of Death in Breslau was fairly risqué but the cover of Marek Krajewski's follow-up, End of the World in Breslau is even more 'eye-catching': 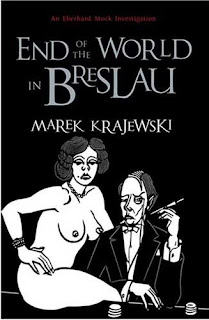 From amazon.co.uk:The city of Breslau, which was the atmospheric heart of the first of Marek Krajewski's novels in English, "Death in Breslau", is as a Georg Grosz backcloth to the second of Criminal Counsellor Eberhard Mock's investigations into a series of seemingly unrelated murders in the late 1920s. While Mock searches for the key to the mystery which afflicts his department in records of crimes committed in the past, his young wife, neglected by his obsessive work, falls among perverse and shocking companions and into contact with a sect that preaches the imminent end of the world. Krajewski's novels are as original as they are disturbing.

Death in Breslau which is set later than End of the World in Breslau is reviewed here and here on Euro Crime.

Labels: End of the World in Breslau, Marek Krajewski

The cover does convey the liberal attitudes of the Weimar Republic.

I interviewed Marek Krajewski at

Are these yet more books translated out of order, then? ie should I not read my copy of D in B until I have read the one with the naughty cover? Or does the author do a flashback in book 2? Or other?

I believe they are being translated in order but the books are set in different time periods. D in B jumps around a bit too.

Thanks, Karen. Bang goes that excuse for delay, then ;-)