My thoughts on another Torchwood audio book. I've reviewed two others here. 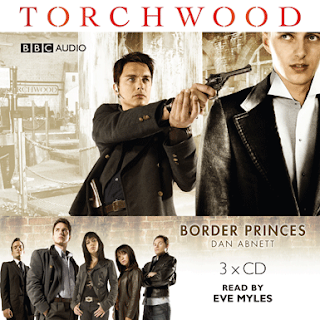 I was very impressed with Dan Abnett's Everyone Says Hello and Border Princes is of an equally high standard.

The book opens with the team expanded on the tv series by the inclusion of a new character, James Mayer, and goes straight into an 'end of the world scenario' with an alien artefact, the Amok, possessing whoever comes into contact with it before killing them. Even when the Amok is finally contained at the Hub, it soon exerts its influence over the team to get itself released. As well as the Amok, the team have to track down a salesman using alien technology to hypnotise home owners into buying double glazing as well as restraining a killer robot from another planet.

Meanwhile, another part of the story deals with the mysterious Mr Dine and his objective of protecting 'the Principal' which overrides all else, and on the personal side, Gwen rows with boyfriend Rhys and seeks solace with James.

Border Princes is action packed, the pace rarely letting up and includes several investigations that would take an episode each on the tv. Gwen, James and Jack carry most of the action with Tosh and Owen playing smaller roles and Ianto barely getting a line. Eve Myles narrates well though she doesn't mimic the other Torchwood actors' voices particularly closely so Jack sounds as Welsh as Gwen at times, rather than his normal American. But in the main you can tell who is speaking and she does have a lovely voice which can send a shiver down your spine.

I'm very glad I bought this - it was worth every penny.

The next Torchwood audio book release appears to be Torchwood: In The Shadows by Joseph Lidster, released in March 2009. Lidster was responsible for the abridgement of Border Princes and also wrote Lost Souls (review coming soon).
Posted by Karen (Euro Crime) at 8:25 am