Today's instalment of favourite discoveries of 2012 comes from Lynn Harvey who blogs at Little Grey Doll as well as reviewing for Euro Crime. Lynn has chosen a DVD.


In addition to Euro Crime, I love animation – in particular adult or art-film animation. So I admit that I may be pushing the concept of "discovery" here toward that of positively "hunted-for". It's the DVD of Alois Nebel, a Czech feature length animation directed by Tomas Lunak and based on a trilogy of graphic novels by Jaroslav Rudis and Jaromir 99. 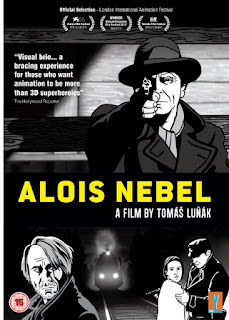 The film is set in 1989 at the time of the fall of the Russian-controlled Czech Communist regime. A man, who comes to be known as The Mute, crosses the Polish-Czech border and is hunted by the authorities. In Bily Potok, a remote village close to the border, Alois Nebel works as a dispatcher at the railway station. A withdrawn man, we see through his eyes a cross-cut of everyday life at the station with his childhood memories of the brutal, forced deportation of the local Sudetenland Germans in 1945. When Alois breaks down in the face of his own memories, he finds himself in a sanatorium sharing a ward with the mysterious Mute who eventually escapes from the asylum. Who is he? And why did he come to Alois' village? When Alois leaves the sanatorium he is forced to join the homeless and jobless at Prague Central Station and the rest of the film tells his story as he attempts to regain his sense of self and peace and return to Bily Potok – where The Mute makes a final appearance.

Rather than recreate the artwork of the original graphic novel the production team, which included the original graphic novel creators, decided to use the technique of rotoscoping which is an animation technique that builds artwork upon live-action film footage. The end result in Alois Nebel is a dramatic black and white animation that vividly catches the characters, landscape and sound-scape of both Prague and the mountainous Sudetenland region. A moving story of love and reprisal.

Here is a sample (subtitle free)

For those interested in animated crime feature films there are others to discover: Renaissance, 20th Century Fox DVD, 2006 is a black and white French sci-fi crime thriller; and on a lighter note, A Cat in Paris, a crime story for all ages, drawn animation, Soda DVD, 2012.

I must see this. The trailer looks terrific.