The next production for the Agatha Christie Theatre Company is Go Back for Murder, which will be touring from January 2013: 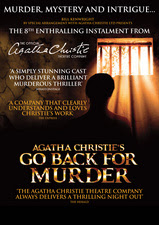 Now in its eighth thrilling year, the Agatha Christie Theatre Company presents a production of the queen of crime’s classic Go Back For Murder.

Carla Le Marchant learns a disturbing family secret; her
mother, Caroline Crale, died in prison after being convicted of poisoning her father. Caroline leaves an intriguing legacy in the form of a letter professing her innocence and, believing this to be true, Carla is determined to clear her mother’s name. Suspects, secrets, and red herrings abound in this thrilling new production

I haven't got the full itinerary but early stops include Windsor, Malvern, Wolverhampton and Cardiff. Another non-comprehensive listing can be found here.

Apparently the play Go Back for Murder was adapted by Agatha Christie from her Poirot novel Five Little Pigs.
Posted by Karen (Euro Crime) at 9:00 am

Oh, I'd love to see this, Karen - thanks for sharing.