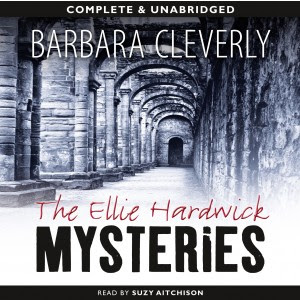 
Barbara Cleverly is probably best known for her historical Joe Sandilands series set for the first few books in India. The Ellie Hardwick Mysteries is a collection of five short stories, starring mid-twenties, Suffolk-based architect Ellie Hardwick, first published between 2003 and 2006 in crime and women's magazines.

Love-Lies Bleeding is set in a Norfolk stately home run by a charity. The repair of a staircase leads to a discovery which requires Ellie to solve a paternity question from several hundred years ago and to do a sort of exorcism.

Here Lies is the first of two stories set in a Suffolk church. Ellie discovers the dead body of a woman lying on one of the church's tombs. Her identify is swiftly established; she was about to marry into a local, ancient family. Someone didn't want her to it seems. Ellie does a bit of sleuthing and Inspector Jennings is introduced.

A Threatened Species again has Ellie visiting a Suffolk church where she discovers a dead body in the belfry. She calls Inspector Jennings out and again does a bit of investigating. (This story has also appeared in The Best British Mysteries IV edited by Maxim Jakubowski.)

A Black Tie Affair has Ellie invited to a swanky evening do at a manor hall she's been working on, owned by a property-developer. Inspector Jennings is her date and they stumble on a body whilst looking round the house... This time round it's Jennings who puts the pieces together.

Die Like a Maharajah, tales Ellie to India on a tour. One of the group is an insufferable woman who upsets everyone, so it's no surprise when she dies. Murder or accident though? Only Ellie has the answer.

This is an enjoyable collection of short whodunnits, which range from 30 to 60 minutes long. Ellie is a traditional amateur sleuth with occasional back-up from the capable Inspector Jennings. My favourite of the five stories was A Threatened Species which has Ellie and Jennings working together to solve the mystery. I would like to read more about Ellie though I haven't been able to track down any newer stories. Suzy Aitchison narrates well, giving Ellie a fitting, perky, indomitable voice.
Posted by Karen (Euro Crime) at 9:06 am

Karen - Thanks for this review. I like the short story format and it's always nice learn about good collections that are out there.