French thriller, Love Crime, starring Kristin Scott Thomas, is released in the UK on Friday. It's already available in the US on DVD. 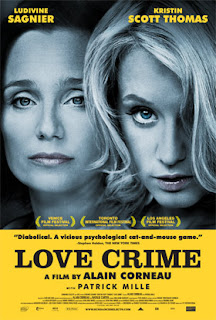 From the official website:
The final film from director Alain Corneau (SERIE NOIRE, TOUS LES MATINS DU MONDE), LOVE CRIME pits the fiery talents of Ludivine Sagnier (A GIRL CUT IN TWO) and Oscar-nominee Kristin Scott Thomas (THE ENGLISH PATIENT) against each other in a deliciously twisted tale of office politics that turn, literally, cut-throat.

When Christine, a powerful executive (Scott Thomas), brings on a naive young ingénue, Isabelle (Sagnier), as her assistant, she delights in toying with her naivete and teaching her hard lessons in a ruthless professional philosophy. But when the protege's ideas become tempting enough for Christine to pass one as her own, she underestimates Isabelle's ambition and cunning-- and the ground is set for all out war. In this devilish, propulsive thriller, Corneau sets up a the scenery expertly and his actors devour it.

Love Crime, from 2010, has been remade in English by Brian de Palma, as Passion and stars Rachel McAdams and Noomi Rapace however it's by no means a shot for shot remake as this article in the L A Times and the film poster show:


The bones of both stories are by and large the same, as a more senior corporate executive (Rachel McAdams) steals the credit for an idea from a colleague (Noomi Rapace in the remake). Both personal and professional intrigues abound, full of minor humiliations and major flirtations, bringing the simmering connection between the women to a boil as feelings erupt into dangerous actions. The story of who does what to whom and why is at once simple and complicated. 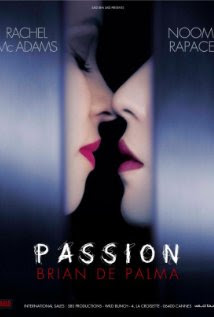 dialogue" credit to Natalie Carter, co-writer with Corneau on the original film — is transforming the relationship between the women from a perverse mentorship in the ways of business and power into a fierce competition by casting McAdams and Rapace in the roles. Where Thomas and Sagnier are separated in age by some 20 years, McAdams and Rapace are barely a year apart. He also repeatedly nudges the audience off-balance with a teasing slippage between the film's reality and the dream life of Rapace's character.

"I saw there were many good things about it, and I saw there were many things I thought I could improve," said De Palma, on the phone from Paris, where he has lived on and off in recent years in addition to New York, of his impression upon seeing "Love Crime" for the first time. "I think it's very difficult to, let's say, remake a classic. This had things that could be made better when you remade it."

Karen - Thanks for sharing this. Sometimes remakes really are good 'uns.