Today's instalment of favourite discoveries of 2012 comes from Mark Bailey. He chooses a Sherlock Holmes tv series but not one of the usual suspects... 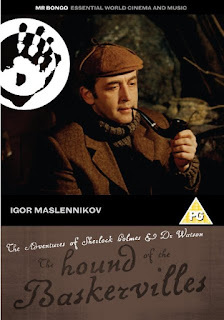 My favourite discovery of 2012 was the Igor Maslennikov Sherlock Holmes and Dr Watson television plays - these are Russian language adaptations made in the late 1970s and 1980s starring Vasily Livanov as Sherlock Holmes and Vitaly Solomin as Dr Watson.
The first one I saw was The Hound of the Baskervilles from 1981 which got a Region 2 release in May 2012 – It was a relatively faithful adaptation with one slight change being Sir Henry Baskerville and his butler Barrymore providing an element of comic relief.
I then sought out the other 4 series (1979, 1980, 1983 & 1986) which are available on Region 1 DVDs with English subtitles – the subtitles aren’t great but you can figure out what is going on. 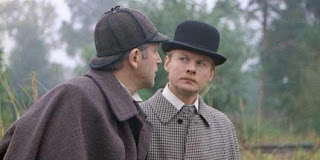 The key elements in their delightfulness are the performances of the two leads (Vasily Livanov and Vitaly Solomin) as well as Ekaterina Zelenaya as Mrs Hudson and that the storylines stay relatively close to the original sources.

..wonder if I would finally understand the plot of Hound of the Baskervilles by watching it in Russian....!