As usual I have asked my fellow Euro Crime reviewers to come up with their top 5 reads of 2012 - these will be collated and announced in early January. Like last year, I have also asked them what their favourite crime fiction discovery of the past year - be it book, film or tv series - has been.

The first reveal comes from Amanda Gillies who chooses a DVD boxed set. 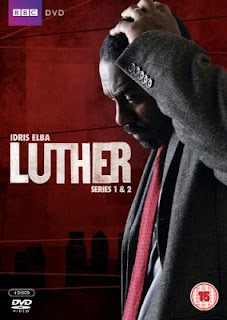 Following on from really rather enjoying reviewing Luther: the Calling, by Neil Cross, earlier this year, I decided to buy series 1 and 2 of the television series of the same name, and by the same author.
I absolutely loved it! Not having a TV, I was unaware of this series and fell in love with the tall, dark, tormented detective Luther, played incredibly well by the perfectly cast Idris Elba. I am delighted that there is to be a third series soon; Luther gets under your skin and I miss him now that I have finished watching both series.
Like most interesting TV policemen, Luther bends the rules a little in order to get the work done. The difference with Luther, though, is that he treads a very close line between "being a dirty cop and just getting his hands dirty", as one of his associates says when she discovers what he has done.
Luther's cases are rather on the dark side, and this appeals to me as well. They are never quite cut and dried and several span over a number of episodes. There is also more to the TV series than just Luther solving cases. His relationship with his ex-wife and her lover, for example, shows you more of the anguish locked up inside him. You frequently wonder what exactly it was that has made him into the person that he is.
If you have been given vouchers for Christmas and are still wondering what to do with them, I recommend purchasing this little beauty. You won't be disappointed.
Read Amanda's review of Luther: the Calling plus more of Amanda's reviews: crime and teenage/YA fiction.

I couldn't agree with you more. Luther is an excellent show with awesome Idris.