Jack Irish starring Guy Pearce, based on the novels by Australian author Peter Temple begins on Friday 14 at 9PM on FX,with the first of two feature-length episodes: Bad Debts, followed a week later by Black Tide. 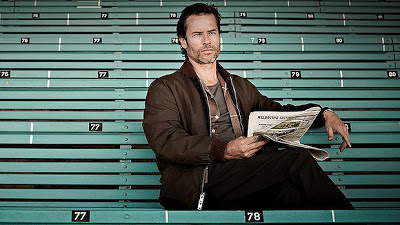 Jack Irish (Guy Pearce) is a man getting his life back together again.

An expert in finding those who don’t want to be found – dead or alive, Jack helps out his mates while avoiding the past.

That is until the past finds him…


Find out more about the series at the ABC website.

It is likely that books three and four, Dead Point and White Dog will also get the same treatment.

As well as the 'Jack Irish' novels, Peter Temple has written the CWA Dagger Award-winning The Broken Shore, and Truth.
Posted by Karen (Euro Crime) at 11:06 am

Glad you posted, i'd forgotten this was being shown. read books, enjoyed one, another I struggled with.

This is very good news -- across the pond. I'm just sulking as it's not offered over here in the States.

On the bright side, maybe it will be available here on dvd.