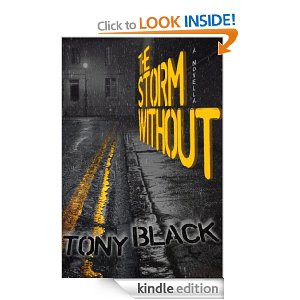 Still recovering from the harrowing case that ended his police career, Doug Michie returns to his boyhood home of Ayr on Scotland’s wind-scarred west coast. He hopes to rebuild his shattered life, get over the recent failure of his marriage and shed his demons, but the years have changed the birthplace of the poet Robert Burns.

When Doug meets an old school-days flame, Lyn, he feels his past may offer the salvation of a future. But Lyn’s son has been accused of murder and she begs Doug to find the truth.

Soon Doug is tangled in a complicated crimeweb of corrupt politicians, frightened journalists and a police force in cahoots with criminals. As he uncovers illicit smuggling activities at the town’s port and falls firmly on the wrong side of eastern European ganglords, the problems he left behind in Ulster are now the least of his worries. Only Burns’ philosophical musings offer Doug some shelter as he wanders the streets of Auld Ayr battling The Storm Without.

THE STORM WITHOUT is a 43,000-word novella, first serialised in the Ayrshire Post.
Posted by Karen (Euro Crime) at 11:58 am