Review: The Dream Killer of Paris by Fabrice Bourland 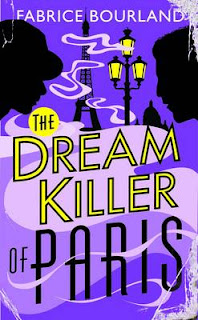 "We sat in a cafe on Rue de Rivoli. Through the window I could see the vast form of the Hotel de Ville and, in front, the old Place de Greve where so many villains had been quartered in the Middle Ages and much of the nobility had been decapitated during the Revolution."

THE DREAM KILLER OF PARIS is the second in the Singleton and Trelawney series after THE BAKER STREET PHANTOM. Andrew Singleton (Canadian) and James Trelawney (American) are private detectives working out of London. It's 1934 and in a quiet period of work, Singleton decides to go to Paris and investigate the apparent suicide of the poet Gerard de Nerval, which took place 70 odd years before.

On the cross-Channel ferry however Singleton is assailed by a vision. He sees the picture of a country scene hanging in the air over the sea and what's more the woman next to him can see it too. Both the vision and the woman disappear leaving Singleton bewildered.

Singleton's not been in Paris long when his friend Superintendent Fourier of the Sûreté intercepts him and asks for his help (again). Two deaths have occurred in locked rooms with no sign of foul play except for the look of terror on the victims' faces.

The victims both had an interest in dreams and the supernatural and both had received a visit beforehand by a mysterious Austrian gentleman. Singleton is joined by his friend Trelawney and along with the police they try to track down the Austrian before he visits anyone else.

On the back of the book, there is the categorisation of Crime/Fantasy which is quite accurate as this is not a crime novel where the usual rules apply; clues come via dreams, a medium and the solution to the crime is fantastical. So long as you're happy with that approach then this is an interesting read with the inclusion of real-life figures: historians, scientists, artists, adding weight to the increasingly otherworldly storyline. Plus there's the bonus of an evocative Parisian setting.

THE DREAM KILLER OF PARIS is a quick read and Singleton alludes to many other cases that they have solved so I expect there are a few more Singleton and Trelawney books in the pipeline, which I look forward to reading.
Posted by Karen (Euro Crime) at 11:12 am

Karen - Thanks for this. It does sound like a very different take on what we think of as a crime novel. I'm drawn to the setting and the historical era. And I do like connections between events that take place in different times.