This short story by M J McGrath has recently become available for free on UK Kindle: 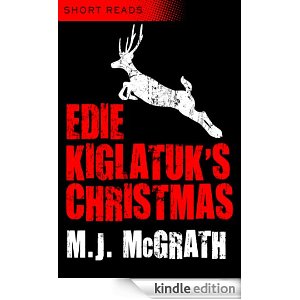 Blurb from Amazon: An exclusive free edition of this stunning short mystery set in the frozen high Arctic and featuring the most compelling new heroine in crime fiction: ex polar bear hunter Edie Kiglatuk. Also includes the opening chapters of M. J. McGrath's new book The Boy in the Snow.

The shortest day of the year didn’t count for much up on Ellesmere Island. By the time 21 December arrived, the sun hadn’t come up for two months and it would be another two before it managed to scramble over the High Arctic horizon. Objects, animals and even people could disappear during the Great Dark without anyone much noticing. Which was why no one reported Tommy Qataq missing . . . Christmas is fast approaching on Ellesmere Island, in the vast frozen landscape of the High Arctic, and half Inuit ex polar bear hunter Edie Kiglatuk is drawn into a mystery when a young man dies in suspicious circumstances. A stunning short mystery with a magical and heart-wrenching twist, Edie Kiglatuk's Christmas is from the CWA Dagger Award nominated author of White Heat and The Boy In the Snow and will be enjoyed by fans of Miss Smilla's Feeling For Snow by Peter Hoeg and Kate Atkinson's Jackson Brodie series.
Posted by Karen (Euro Crime) at 2:57 pm