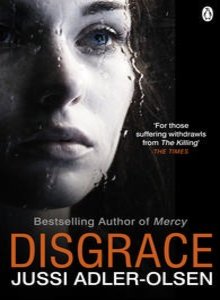 
DISGRACE is the eagerly awaited sequel to the popular MERCY, the debut of Jussi Adler-Olsen; both are set in Copenhagen. MERCY introduced Detective Superintendent Carl Morck who is assigned to work cold cases in Department Q. His only colleague is a civilian, the mysterious Assad. They are joined in DISGRACE by a forthright police secretary, Rose.

Someone wants Carl and co to reopen a case that's been solved. The investigation into the brutal murder of a brother and sister was closed nine years later when the murderer confessed however someone thinks that that's not the whole story. They link those deaths to a number of other assaults and disappearances and believe the culprits to be a group of now prominent businessmen.

After the success of MERCY it would be hard for DISGRACE to reach the same height and unfortunately for me it didn't. There are plenty of things to like still, the humour, the conversations between the three disparate members of Department Q and Carl's attempts to woo his psychologist, and a solid police investigation. On the negative side are the bits which don't involve Carl. The people Carl is chasing and their activities are so unpleasant – both animal and human cruelty abound - that I found their, at times quite lengthy, sections hard going. Whereas MERCY's second narrative strand came from the strong and sympathetic victim of Merete, DISGRACE has Kimmie who is also strong, but unlikeable and unbalanced and though there is an attempt to explain her abnormal and violent behaviours by a terrible childhood it's hard to feel anything for her plight. For me this was at times a difficult read but those less squeamish than I, may get more out of it.

I'd also recommend reading MERCY beforehand to get up to speed with Carl's work and personal situation.
Posted by Karen (Euro Crime) at 10:51 am

Good review - I agree with your take, and found this book sadly disappointing after the excellent Mercy. I quite enjoyed the bits about Kimmie on the run (as you didn't quite know how awful she was then, I think, from memory)....but I think that theme was done better in Missing (Karin Altvegen) and The Girl Who Played With Fire (S Larsson).

This is called The Absent One in the U.S. It is way too violent for me. One of the attractions of his first book was the relationship of Carl and Assad. I miss it in this book.
Barbara Lorentz

I appreciated your thoughts. I did not find as disappointing as yourself and Maxine. I did not consider it as good as the first book but still enjoyed the book. I saw Kimmie as remarkable. I believe a character can be both bad and a victim. Her duality challenges readers.

Oh, gosh, if it's disappointing as a sequel to the excellent Mercy, and lacks the relationship between Carl and Assad, and it's extremely violent, I'm leaning towards skipping it.

The animal cruelty just tipped it over to a do not read. I would NOT enjoy this book with this element.