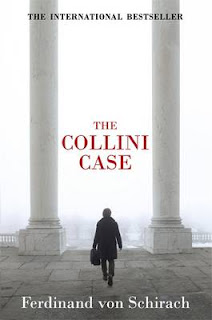 
THE COLLINI CASE is a short, powerful and important crime novel, one that has played a part in the setting up of a (German) Ministry of Justice committee into looking at the effects of the past on the current state of the Ministry.

The book opens in Berlin with the clinical description of a murder and the subsequent surrender of the murderer to the police. The killer, Herr Collini, originally from Italy, admits his guilt but refuses to say any more. The public defender on call is the young, newly trained but enthusiastic Caspar Leinen and he accepts the case. He then finds, however, that he has a personal connection to the victim, nonetheless his mentor says he must be a lawyer and defend the man irrespective of his feelings.

Caspar however has an uncooperative client and is left on the brink of a disastrous trial but a chance remark puts him on the right track to defending his client.

After the rather chilly start, a la Andrea Maria Schenkel, the story moves into warmer territory and becomes extremely moving with the horrific and inexplicable murder becoming more understandable. The reader and Caspar see two sides to the victim and murderer. The latter half of the story is a gripping courtroom drama and a reminder of what must not ever be forgotten.

Also worth seeking out is the thematically related film, Music Box, starring Jessica Lange and Armin Muller-Stahl which made a huge impression on me in 1989 and is available on DVD (2007).
Posted by Karen (Euro Crime) at 10:32 am

Agreed - a very good book, and the ending made me think a lot, even though I'm more familiar with the legal context than most. I actually don't mind a bit of chilliness in this situation, as I don't really like over-emoting in courtroom situations in novels.

Mind you, I had to repress a bit of a shudder when I saw the author's name. (I read this in the original after seeing it reviewed on a book programme on TV here, but I switched on halfway through the segment and missed the author at the time.)

Particular credit to the author, too, for making this reader - someone who almost always prefers 400-page tomes to novellas - realise that you can sometimes say a lot in not that many words.

Intrigued by the "shudder" :). I must read his short stories collections one day...

Not Ferdinand's fault, but his grandfather Baldur was a historically significant and deeply repellant figure in the Third Reich, and paying good money for a book written by someone named von Schirach did make me pause for a moment, particularly a crime novel! (And when I realised where the plot was going,I wondered if we were going to end up in wallowing in something personal, so I'm very grateful to the author for not doing that.)

Karen (Euro Crime) said...
This comment has been removed by the author.
6:02 pm