OT: Half a dozen American cozies

I've read a few non-European reads recently. Here are a few random thoughts (I've linked the author's name to their website where available): 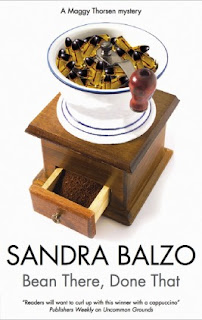 1. Bean There, Done That by Sandra Balzo. A post on DorothyL from the author prompted me to check out of the library her third book in this series about coffee house owner, Maggie Thorsen which is set in a Milwaukee suburb. The first one in this series was Uncommon Grounds (the name of the shop) and was very fine indeed and received several best first novel nominations. I felt the second book, Grounds for Murder, was less enchanting but this one is a return to form. Will definitely make you want to reach for a latte. 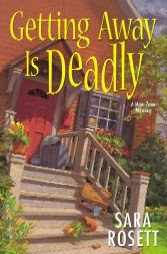 2. Getting Away is Deadly by Sara Rosett. Again this is the third in the series but I haven't yet read the previous two. I won a copy of the hardback via murdermostcozy yahoo group and I loved it. It's set in Washington DC and a group of air force wives take in the sights whilst their husbands are on a training course. They soon stumble across a murder. I really enjoyed revisiting the tourist hot spots plus a few I haven't been to and the mystery is strong. I have reserved the earlier two from the library and I'll see if the non DC setting makes them less enjoyable or not. 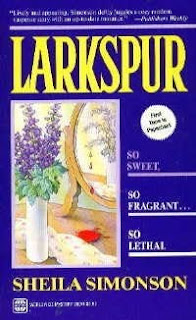 3. Larkspur by Sheila Simonson. In a vain attempt to reduce my to be read piles I have tried the first book in a few series to see if the rest are worth storing(!). Larkspur is the first in the Lark Dailey series. She's a book store owner in North California. The murder takes place in a classic set-up: remote cottage, death by poisoning with a limited number of suspects. Good puzzle and I enjoyed the setting. I already own the last in the series so plan to fill in the gaps. (I bought Larkspur in '97) 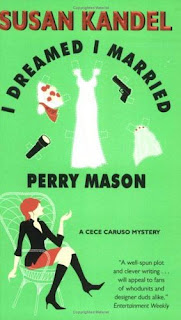 4. I Dreamed I Married Perry Mason by Susan Kandel. A more recent acquisition but even so I've had it three years, amazingly! Another excellent find and I've ordered the next two off Amazon. The first in a series which features LA based biographer Cece Caruso. In this one she's tackling Earl Stanley Gardner and there's plenty of information on him and Perry Mason which I loved. The mystery is less taxing but it didn't matter! The next one is about the authors behind Nancy Drew which I'm really looking forward to. 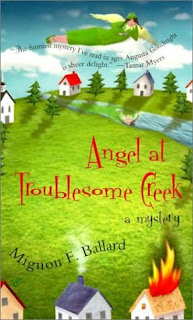 5. Angel at Troublesome Creek by Mignon F Ballard. This is a series about a guardian angel - August Goodnight - and in this one, the first in the series she comes to the aid of a depressed young woman - an orphan - whose last bit of family, an aunt has been murdered. I liked the book but didn't much take to the 'angel' as she's not in it much and I preferred the woman she was helping. I would carry on with the series if it was her series. I own the third in the series as well - I may read it at some point but have no plans to buy any more. North Carolina setting.

6. A Love to Die For by Christine T Jorgensen. This is the first of the Stella Stargazer series set in Denver. Another book I've had over ten years. Initially I thought I wasn't going to like it but it got better. 'Stella' is ex-accountant Jane who has ditched her job, boyfriend and home to change into Stella and write an astrological column in the weekly paper. She's also slightly psychic and with her first letter from the public she gets a 'flash' of a dead body. As she knows details she shouldn't she soon becomes a suspect in a murder case. I'm glad I stuck with it and I have the remaining four already on the shelves to read.
Posted by Karen (Euro Crime) at 7:53 am