Review: Without a Trace by Liza Marklund tr. Neil Smith 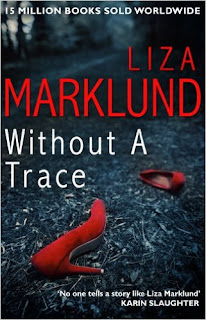 This tenth book in the series that features the journalist Annika Bengtzon, focuses around the mystery behind the disappearances of two women. One is Nora, the wife of the ex-politician Ingemar Lerberg, who has just gone missing. The other is Viola Söderland, who went missing twenty years ago.

At the start of the book, Nora’s husband Ingemar, is being tortured rather horrifically and the perpetrators clearly want to know where Nora is. His almost lifeless body is found and reported anonymously, and Annika is sent to cover the story. Viola’s disappearance was covered by Annika’s boss: Anders Schyman, in a TV documentary for which he was given an award for Excellence in Journalism. Although the consensus was that Viola had been murdered, Anders found evidence that the billionairess, faced with some kind of financial crisis, had planned her disappearance very carefully. But on searching the web for information about Ingemar, a man whom Schyman knew and sometimes socialized with, he comes across a website calling itself the ‘Light of Truth’ where the author has started to call into question Schyman’s story about Viola, and appears to have started a personal attack on Schyman himself. These two threads form the main part of the story.

Meanwhile, there is the usual family background as part of the story. Annika is now living on Södermalm, a very cool and trendy part of Stockholm, with Jimmy Halenius (with whom she got together in the last book, while her ex-husband Thomas was kept hostage in Africa), her two kids, and his two. Thomas, also appears from time to time, and true to form, is feeling very sorry for himself after their break up, as well as very self conscious about the hand he lost while captive, which is now simply replaced with a hook. And there is the re-appearance of Nina, assigned to National Crime, and working with Annika’s long term inside contact ‘Q’. Nina and Annika also know each other from the past (as detailed in an earlier book). Nina is in charge of finding out who tortured Ingemar, and what has happened to Nora, and it’s she who starts to uncover Nora’s secret life, as we start to find out something about Viola’s through Annika.

There are also the interesting reflections on how journalism has changed, with there no longer being the print deadline, but with Annika videoing herself in front of the crime scene, editing some footage, and uploading the video as well as text on line, as soon as she is ready. But is Annika a little battle-weary? At one point she comments on how she could write several of the articles on line, without even leaving the office and going to see anyone, as the same types of stories resurface again and again. Annika also has an intern to look after, Valter Wennegren, son of the man who owns the paper, who turns out to be very useful. The ‘Light of Truth’ also highlights the ability of anyone to write anything they like online, and how destructive this can be especially when what appears to be a hot story, is taken up by other online media and goes into the mainstream. It’s interesting to see how Schyman, himself a veteran journalist, deals with the character assassination and how doubts raised about him and his integrity raised by an anonymous blogger start to take on a life of their own, as myths are circulated as truths.

WITHOUT A TRACE is a book with lots of bits and pieces, that just about hangs together as a whole. There is much musing on journalism, Annika’s role in it, her slightly jaded approach to it all, and yet still her engagement with it, and love of her job. The pressures of her new family and various uncertainties there also play an important part in the book, while the stories of Nora and Viola are almost plot devices to compare journalism then, and now. That is, one is rather less concerned as to what has happened to these two women, than how the stories are (or were) presented. I always enjoy Marklund’s books, and this is no exception, and while it didn’t have the taut drama of some of the previous books, it was a thought-provoking read.