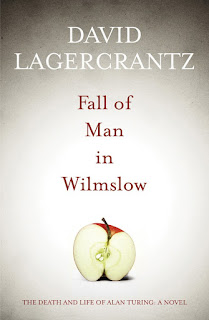 FALL OF MAN IN WILMSLOW by David Lagercrantz (translated by George Goulding) is the first fiction work by this writer translated into English, and was released before the much anticipated THE GIRL IN THE SPIDER'S WEB. This book takes the form of a fictionalised account of a police investigation into the suicide of noted computer scientist Alan Turing in 1954 a couple of years after his conviction for “gross indecency”. Turing's punishment arising from this conviction was to be coerced into hormone treatment as the only alternative to a prison sentence. The achievements of Turing and the role played by the Bletchley Park codebreakers during the Second World War were to be closely guarded state secrets for decades to come.

The protagonist is the young Detective Constable Leonard Correll. Correll is the first police officer on the scene, called to Alan Turing's house in Cheshire after Turing's body is found by his shocked housekeeper. Turing died in his bed after eating an apple that had been contaminated by cyanide. Correll is a rather unusual policeman. The son of a relatively successful writer and raconteur, Correll feels he had great expectations which were thwarted by the financial ruin of his family and subsequent suicide of his father. Instead of a chance of a Cambridge degree and potential academic career, Correll left his public school, and ended up living and working in the tranquil Cheshire suburban town of Knutsford.

Correll's small official part in the investigation is over after giving evidence at the inquest. But he cannot resist carrying on his own clandestine investigation. Correll looks into Alan's theories and writings and is particularly fascinated by the Liar's Paradox, the conundrum central to Turing's views on logic). While he shares the homophobic prejudices of those he works with, he is impressed by Alan's academic credentials and curious about the nature of his secret war work. This curiosity is fuelled by the interest shown by the Secret Service in Alan's death and possessions left behind. When Correll moves out of library work and starts to seek out Turing's friends and former wartime colleagues in Cambridge, he attracts the attention of dangerous enemies.

Correll is a fully fledged, convincing character, hampered by a sense of social inadequacy coupled with thwarted academic ambitions. But he isn't the submissive pushover he at first appears, gaining confidence as he moves into the academic circles that he aspires to. However the real star character is Turing, and this book contains a wealth of detail about his life and theories. Lagercrantz shows us just how badly Turing was treated by British officialdom despite his vital contribution to the Allies' victory. Scapegoated as part of the McCarthyite witch hunt which meant that even on this side of the Atlantic gay men and women were vulnerable to being scapegoated as likely communist sympathisers. I found FALL OF MAN IN WILMSLOW was very well written, falling more or less in the thriller genre, and that the author had a particularly impressive grasp of the geography and general feel of North West England for a non-British writer. I look forward to reading future books by this author.