Review: I Am Death by Chris Carter 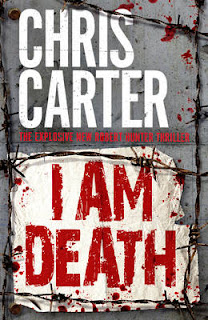 This book is a complete heart-stopper. It’s starts off brilliantly and just gets better and better. The story catches your interest right away and continues to throw grenades at you. Right until the end. When you read the credentials of the author, Chris Carter, it is not surprising that this novel has the effect on the reader that it does. Carter originally studied psychology and criminal behaviour at the University of Michigan, then had a career in this field before moving to London and turning his hand to writing. His understanding of the criminal mind, as well as his skill at putting pen to paper, combine to make this book a truly delicious nightmare.

The story is the seventh in Carter’s series featuring LAPD detective Robert Hunter; a man with a skill for catching really nasty killers. When the body of a young woman is found, laid out in a star shape, on grass near LA airport, Hunter and his team are put on the case. A gruesome note, written in the victim’s blood, is found lodged in her throat and at this point Hunter knows there will be more bodies. His suspicions are proved correct when another body is found – tied to a chair in her own living room and horribly tortured – with the same message written in blood. All of Hunter’s skills are put to the test as he races against time to find the killer before the bodies start to mount up.

The chapters in I AM DEATH alternate between Hunter’s race to find the killer and the story of a young boy, Squirm, who is kidnapped by the killer and forced into slavery by him. Squirm’s story is shocking and you wonder when he will be added to the pile of bodies too, especially when he is forced to watch videos of his captor’s killing sprees.

Don’t be fooled by this book. You won’t be able to guess the end; it has a fabulous twist in its tail and will leave you reeling. Carter does not hold back on his descriptions of torture of murder scenes, so if you are a bit on the squeamish then maybe this isn’t the best book for you to read. However, if you like books by Jeffrey Deaver, Peter James or Thomas Harris then this book is most definitely going to be right up your street. Although this is the seventh in a series it works very well as a stand-alone novel. It is the first of Carter’s books that I have read and I am now extremely tempted to go and find the earlier six.