Review: Supping with the Devil by Sally Spencer 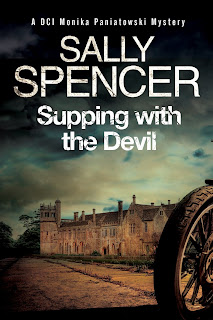 Monika Paniatowski's boss is trying to destroy her career, but the dead end case he assigns her turns out to be something else entirely ...DCI Monika Paniatowski recognises her latest assignment as advisor to the Earl of Ridley's rock festival for what it really is - an attempt by the chief constable to destroy her career. Yet it soon becomes apparent that matters are not as simple as they appear. Why, for instance, did the earl choose to employ the notorious Devil's Disciples motorcycle gang to provide the security for the festival? And to what lengths will his mother, the dowager countess, go to destroy it? But it is when the half-naked body of a tabloid journalist is discovered in the middle of Whitebridge that things really start to hot up.

This mystery starts on the 9th August 1976. Detective Chief Inspector Monika Paniatowski is really fed up, she has been sent as an adviser to the Earl of Ridley who is holding a rock festival on his land. Strangely enough, he has decided to use a large biker gang of some forty men as security guards. Monika has had a disastrous personal relationship with Chief Constable Baxter and he has sent her on this assignment for revenge. He has appointed in her place a DCI Wellbeloved who causes major ructions with her team of detectives. There are several well plotted strands to the story and I have read enough of the author's books to know that when she writes her police procedurals the story will be very well plotted, original and told with some wry humour.

Sally Spencer writes the book with her usual panache; I was a little confused at first in that there are several plot lines happening simultaneously: Monika is involved with the rock festival, whilst her old team are investigating a murder and trying to cope without her, but instead with her replacement. As an author of some forty or more titles under her belt nothing phases her and you end up with a really gripping police procedural of the most exciting kind which I could not put down.

The plot, which has some dramatic twists and turns, the vivid, well researched and knowledgeable background, and the widely diverse scenes kept me transfixed until the last page. Well recommended.