Review: The Last Confession of Thomas Hawkins by Antonia Hodgson 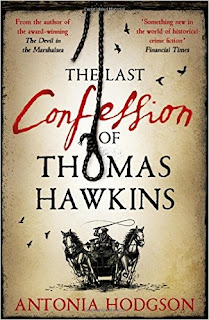 Antonia Hodgson's first novel, THE DEVIL IN THE MARSHALSEA, which I reviewed last year, won the CWA Historical Dagger Award 2014 and was shortlisted for the John Creasey Dagger for Best First Novel. It was also chosen as a Richard and Judy and Waterstones book club selection. In the author's second novel, she continues the adventures of Tom Hawkins and I thought this book was even better than the previous one, which won so much praise.

It is 1727 and Tom Hawkins, the protagonist who survived a full three months of incarceration, now lives in Covent Garden with his companion Kitty Sparks. Three months after his release he has been found guilty of a brutal murder and he is currently being dragged on a cart to Tyburn to hang, while the crowds jeer his name. What on earth has gone wrong and why does he expect none other than the Queen of England to save him with a last minute pardon? This is the beginning of the reader's increasing tension during the latest instalment of the adventures of Tom Hawkins, the Norfolk vicar's son who decided not to enter the church after university but is now a bit of a rake and lives in a house producing pornography in Covent Garden, spending his free time in bars engaged in drinking and gambling.

In the next house there is a man, Joseph Burden, a huge giant of a man, who is always protesting that Tom and Kitty are leading lives of the utmost depravity and they should repent and become decent human beings. He is a member of an organisation called The Society For The Reformation of Manners (morals), which was formed many years ago to rid the city of whores, thieves and sodomites and he has great influence with John Gonson, a city magistrate and a leading member of The Society and over the years they had investigated and closed a number of brothels etc and Tom is always arguing with him, sometimes quite violently.

On the journey to Tyburn, which can take apparently over over two hours, Tom is hauled in a cart behind his presently empty coffin and we recap over the circumstances that led to the present terrible predicament. We hear of his decision to agree to help, at the request of the Queen, to get rid of the husband of the King's lover who is causing a lot of problems at court. I should mention that this book is not for those who are easily shocked, as in order to portray an accurate account of life in London in 1727, the author describes some of the coarseness of human behaviour at that time but sometimes exhibiting a rather naughty wry humour in so doing.

The body of Joseph Burden is discovered, stabbed multiple times, the day after half of the street heard Tom shout at Burden that he would kill him during a rowdy confrontation and Tom is quickly arrested.

I thought that the first book, THE DEVIL IN THE MARSHALSEA, was one of the best historical thrillers that I have ever read. The breadth of the author's research and scholarship to give an accurate portrayal of life at that time is is truly remarkable. I was gripped completely with the fantastic and enthralling storyline in this continuation of the story in THE LAST CONFESSION OF THOMAS HAWKINS. I look forward to reading many more books from this very promising and talented new author. Extremely well recommended.