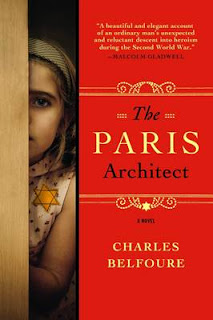 This book was simply beautiful; well-written and a bittersweet story. One of those books that you don’t want to end, not only because you are enjoying it so much but also because you are in love with the main character and are hoping against hope that he survives but don’t feel brave enough to find out. Charles Belfoure, the author, is himself an architect and the authenticity this adds to the descriptions of our hero’s musings adds even more to this wonderful tale. Belfoure lives in the USA but this story qualifies for Euro Crime as it is set in Paris.

It is 1942 and France is under occupation. Lucien, our hero, is ambitious and frustrated by the lack of work in wartime Paris. Then he is approached by a wealthy man and given a commission that could see him facing certain death if he is found out – he is asked to design a secret hiding place for a Jewish man. At first he is excited by having the opportunity to outwit the hated Germans but then begins to see the humanity behind his actions and when one of his designs goes wrong, leading to a terrible death for the couple who are hiding, he is shocked to the core. Now his actions take on a different meaning and the reader gets caught up with him in his desire to save lives. As well as designing hiding places for Jews, Lucien ends up becoming an architect for the Germans and designing munitions factories for them. Called a traitor by his own people, when all he wants is to be able to design beautiful buildings, he feels as if he could be shot by either the Gestapo or the French Resistance. You, the reader, desperately hope that he escapes the clutches of both and survives to the end of the book but it could go either way – which only adds to the beauty of the story.

This is the second book by Charles Belfoure and is a truly wonderful read. If you like stories that bring a lump to your throat and show how good people can be when all around them there is nothing but evil, wickedness, and betrayal, then you are going to love this book as much as I did.