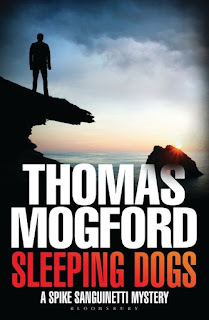 The city of Saranda curved around its amphitheatre-shaped bay. The concrete blur only hazily visible from Corfu now resolved into Soviet-era tower blocks, a low port complex, a few stunted palm trees embedded along the sandy beach.

Kavos, Corfu.
The girl thrusts her things into a bag and nervously checks the window. This is when the door to her room bursts open …

Gibraltar.
With his law partner, Peter Galliano, on long-term sick leave and the firm struggling financially, lawyer Spike Sanguinetti sits in the psychiatrist's office reluctant to discuss his insomnia and panic attacks. He doesn't even manage the allotted hour. As he leaves, the therapist reminds him that his problems won't just “go away”. At home that night, babysitting the young, grieving son of his dead lover, he finds his elderly father rocking the boy on his lap, soothing his night terrors.

Corfu.
By way of a much needed break, Spike's father has insisted on their going ahead with their pre-arranged stay with Peter Galliano at his home on Corfu's northern coast. Their friendly driver names the villa-owning billionaires of the region, not least the media mogul Sir Leo Hoffmann whose estate borders Peter's home. A warm greeting and an idyllic evening drink on Peter's terrace is interrupted by the arrival of Spike's ex-girlfriend, Gibraltar Police detective Jessica Navarro, another of his father's surprises and a jolt for them both. Their awkwardness eases over the meal cooked by Katarina, Peter's housekeeper. The view of the Albanian coast across the Corfu Channel prompts Katarina to describe how her husband swam across the channel to escape that country's Communist regime. They met, married, and had two sons, but her husband died ten years ago and is buried back in Albania. Towards the end of the evening Peter tells them that everyone has been invited to the Phaeacian Games on the Hoffmann estate tomorrow, a celebration inspired by Sir Leo's passion for Ancient Greek history and archaeology. Spike decides on another bottle of wine and in the kitchen interrupts an irritable quarrel between Katarina's son Lakis and Arben, the handsome young Albanian who accompanied Jessica to the house tonight. Arben comments on Spike's blue eyes, an evil omen in his native Albania …

Sometimes you just want to plunge head first into a short, sharp thriller; one that keeps your attention from start to finish and – if you share my taste for crime in faraway places – paints a vivid picture of its setting and characters. This is just what Thomas Mogford, ex-journalist and translator, provides in SLEEPING DOGS. His fourth Spike Sanguinetti novel sees Gibraltarian lawyer Spike, burnt out and broke, holidaying with his law partner Peter in Corfu. During a grand soiree at the neighbouring villa, celebrating the archaeological finds of its owner billionaire media mogul Sir Leo Hoffmann, more than the statues of the title's Sleeping Dogs are revealed in the caves below; the dead body of a young Albanian leads to the arrest of another young man for murder. Spike is called in to provide legal help and the story escalates into the pursuit of a missing witness and the murderous terror of vendetta.

This Corfu-set episode stands up to reading without “prior knowledge” of the previous three Sanguinetti books. Its short, sharp chapters pick up increasing pace as the story weaves between the terrified flight of a young woman from Corfu to her native Albania and Spike and Jessica's attempts to find the real killer of a murdered man. With a peppery mix of young and old, the mega-rich and the working locals, and the contrasts of Corfu and Albania, this is a well constructed, entertaining and accessible thriller.

A series I'm very much looking forward to.