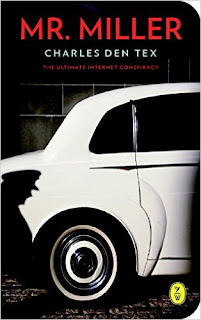 MR. MILLER is the first novel in English for Charles Den Tex – and it’s a cracker. He’s a three time winner of the Netherlands’ Golden Noose award for best crime novel (this is the winner from 2006, a best-seller there). It’s a little late in arriving here. But as the debut of Hunted, Channel 4’s electronic surveillance reality show in September demonstrates, the book has lost none of its relevance.

The bottom drops out of the world of Michael Bellicher, high-level EU-serving communications consultant, one afternoon at Schiphol Airport. He’s there with his ‘Bible Belt’ parents to meet the younger brother he hasn’t seen for five and a half years. What is revealed to him there triggers a mental collapse that results in a lost alcohol-fuelled weekend, punctuated by half-heard TV news bulletins (the Netherlands like Britain, appears to be suffering from acute post 9/11 Islamophobia), along with frantic emails from his agitated clients and colleagues. Brought to something like his senses by one from Jessica, his girlfriend in San Francisco, he stumbles into work three days later to find himself on the point of dismissal. Michael decides to work through the night in an effort to rescue his lost credibility. But on the way down to the staff canteen for some refreshment, he is startled to discover the body of a woman, dead. Shortly after he hears the body being removed, only for it to turn up later in the basement car park, with Michael the key suspect in the murder. His nightmare begins.

Right from the start (as you might expect from a writer who once was himself a communications consultant and management advisor) Den Tex succinctly and credibly outlines the world of the consultant. Michael lives for his work, high pressure round the clock influential work, assignments that have brought him “to the heart of every major development”. The company meanwhile knows everything about him, what his favourite music is, his IQ (nothing less than 180 will do), when he last visited the dentist. His friends, including Jessica, fulfil similar demanding requirements, whilst also displaying other “audacious talents and bizarre gifts”. His parents are unhelpful. But one or two friends rally to his cause.

His options at the company starting to run out, he gathers up all the information that he can quickly commandeer, lap-top bag on his shoulder, and decides to go under the radar. Accompanied, it appears, by the mysterious Mr Miller whose website appears amongst a list of email addresses Michael has extracted from the computer of the dead woman. But who is Mr. Miller? And how is Miller tracking him everywhere he goes?

What follows is a fast-moving thriller in which Michael, credit cards invalidated, abandoning cell phones as they become traceable, follows up every lead he has, however unpromising. His predicament has been picked up in the media, friends are endangered or attacked, even Jessica (by email, at first) begins to have her doubts. And, as his investigation starts to reveal the international all-embracing nature of the network – and its malign intent, Michael too begins to question his whole existence. He also uncovers some unexpected sources of help: a reconciliation with that estranged brother that brought about his mental collapse for instance, a South African connection proves fruitful (and how!), as well as a connection with some maverick elements of the computer world itself.

The pace is perfectly judged, the writing astute and perceptive, both economical and expressive (Den Tex acknowledges British thriller writer Desmond Bagley as a key influence, and, I believe significantly, Michael's bookshelves include books by Dashiell Hammett, that master of the taut narrative). Most of all tension is continually raised, up to and including the splendidly engineered, occasionally surreal climax. And it is very readably translated by Nancy Forest-Flier. Miraculously too Den Tex has managed to incorporate without lecturing, themes of work/life balance, the importance of family, and above all, that the most serious risks to democracy come not from the many external threats, but from unbridled abuses within the democratic framework. “An action thriller with brains” said a Netherlands newspaper. I couldn’t put it better myself. Well worth reading.

FOOTNOTE. I have known Charles Den Tex since 2004. For Crime Time magazine in 2008, we collaborated on a Crime Scene: The Netherlands feature, some of which was updated by Charles to appear in Barry Forshaw’s Euro Noir (Pocket Essentials,2014). But apart from that and a short story (Charles, Australian by birth, can write very capably in English), I have never read anything else that he has written. It can be a real test of friendship when finally you get to read something for which you have waited for some time. No such problems here. It’s an excellent novel and I heartily recommend it. Let’s hope World Editions will follow it up, perhaps with others from the Den Tex oeuvre.