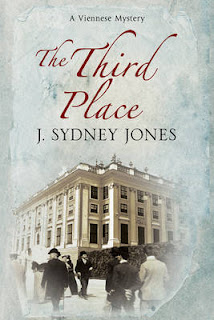 Austria - early in the twentieth century. Herr Karl Andric is the well respected Head Waiter at the Cafe Burg. He lives a quiet life in his landlady’s house, collecting toy soldiers depicting the Napoleonic wars. One night leaving work he is brutally murdered. Although not able to identify his murderer, his death is witnessed by a waiter at Herr Karl’s Austrian Tea Room.

The waiter and his uncle approach Advokat Karl Werthen asking him to investigate. However no sooner has he commenced his investigation, Werthen is summoned to see Prince Montenuovo. The Prince is Second Master of the Court and answerable to the Emperor Franz Josef himself. Franz Josef has been widowed since his wife Empress Elizabeth was stabbed to death by an Italian anarchist. He has formed a relationship with Katharina Schratt, a leading actress. One of his letters to her has gone missing and would be very embarrassing in the wrong hands.

Werthen is tasked to recover the letter and his old friend the eminent criminologist Dr Hans Gross joins him in the investigation. When this mission is successfully concluded, but before Werthen can resume his Herr Karl case, the Prince again summonses both him and Gross. There has been an assassination attempt on the Emperor, and the belief is there will be further attempts.

Leaving Werthen’s wife Berthe to continue investigating Herr Karl’s death, Werthen and Gross soon realise they are trying to identify a resourceful killer who will stop at nothing to achieve his aim. The man is an old adversary of theirs, who has nothing to lose having fled Russia when sentenced to imprisonment in Siberia.

This is the sixth Viennese mysteries by the author. It is very well researched, and is an interesting part of history. Archduke Franz Ferdinand appears in the book. He was the heir apparent to Franz Josef’s throne since the suicide of his son Prince Rudolph. Franz Ferdinand and his morganatic wife Countess Sophie Chotek were assassinated in 1914 on a visit to Sarajevo. Austria and Hungary declared war against Serbia. However they had Russia as an ally and this led to World War One.

The book provides a very interesting backdrop to these events, well written and entertaining. Although I haven’t read any of the other Viennese series, I have read other books by the author and this is well up to his high standard. As usual his book title has a meaning. In Austria, the first place is home, the second place is work and the third is the coffee house. Highly recommended.