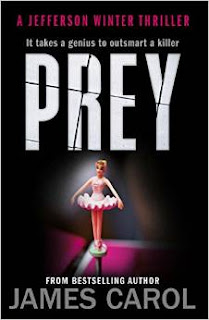 Jefferson Winter is an ex FBI-profiler who now works as an independent consultant helping police forces across the world. One evening he is approached in a diner when having his evening meal. The young woman gets his attention by suddenly and brutally killing the diner's cook. Reluctantly, Jefferson is drawn into the search for the woman. He knows he needs the help of the police to gain access to their records so he enlists the help of Carla Mendoza, the policewoman whose case of a psychopathic killer, Ryan McCarthy, he helped to solve.

The meagre clues that they have regarding the identity of the mysterious woman lead Jefferson and Carla to the murders of a husband and wife and the subsequent suicide of the killer. As they look into these deaths, they find a trail leading to more murders and Jefferson realises that he has been stalked by the woman - who is convinced that she and Jefferson have a lot in common - not least, she feels, their desire to kill people.

PREY is an interesting book but I felt little connection with the main characters of Jefferson or Carla and this did impact on my enjoyment. If you like the books of James Patterson, you might like this, the third in the series of books featuring Jefferson Winter.