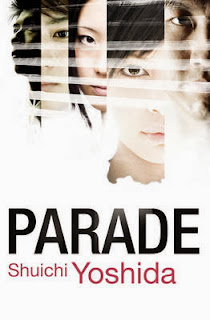 PARADE by Shuichi Yoshida is the second of his books to be translated into English, following the success of cult thriller and film VILLAIN, and is a tale of Tokyo urban anomie, focussing on the lives of five young people sharing a small suburban apartment.

The book is narrated from the point of view of each of these five people, with each section moving a little further forward in time; Ryosuke, a geeky student and part-time Mexican restaurant chef, Kotomi the lovelorn small town girl who has come to Tokyo to reunited with her former boyfriend and current TV star, waiting around to be thrown crumbs of his affection in the form of booty call, Mirai a sarcastic and cynical shop manager with a drink problem, who hangs out in the gay bars of Tokyo, and Naoki, ostensibly the most successful of the bunch, with his high powered film industry career. Into this mix comes Satoru, a worryingly young drifter of no fixed abode, who earns a living by "night jobs" and charms the flat mates into allowing him a spot on his sofa. The device of using five different narrative voices works surprisingly well, with Yoshida managing to convincingly differentiate the characters.

Underneath the sitcom cosiness of the flatmate set-up, a darker spectre lurks. Each of the flatmates has their own reasons, some of them quite sad for coming to Tokyo, and all have secret self-destructive behaviours to hide from others. And dangers lie outside the flat; a mysterious maniac is brutally assaulting women near the local metro station, and closer to home, a suspicious procession of older men and tearful young girls frequent the neighbouring apartment, no 402.

PARADE is a slow burn psychological thriller, a sort of Japanese fusion of Friends and American Psycho. The most shockingly violent crimes and the identity of their perpetrator only become evident at virtually the end of the novel. Yoshida shows that at its worst, urban alienation can lead to sinister crimes and complicity, covering similar ground to VILLAIN, but in a more opaque fashion. But these crimes don't really come out of the blue, but more as a logical end point to the fragmented society depicted by Yoshida. While the flatmates strain to hide their real selves and present a more positive social image, they are party to a lot of harmful behaviour and smaller crimes as perpetrators, victims and bystanders, ranging from breaking and entering, drug taking, prostitution, domestic abuse and to lesser misdemeanours such as obsessive romantic behaviour and infidelity. Overall I found this a somewhat unconventional thriller, and an interesting and quick read, but rather more low key than VILLAIN.