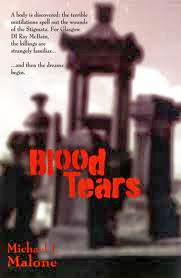 This book is simply amazing! It’s one of those rare gems that catches you on the very first page and doesn’t let go. Written by another first rate Scottish author, BLOOD TEARS has been awarded The Pitlochry Prize from the Scottish Association of Writers and it is something every lover of dark and disturbing crime fiction should be aiming to read. A crime fiction debut for Malone, as well as his first in a series to feature DI Ray McBain, this book will leave you itching to get your hands on the next instalment – which, mercifully, is already published and waiting for you.

To give you a taster – a terribly mutilated body is found, bearing the wounds of the Stigmata. McBain and his team are shocked at the discovery but not as shocked as McBain himself when he discovers he has a connection with the deceased, who was a known paedophile and gardener at Bethlehem House; the Catholic children’s home where McBain had spent his formative years. For reasons as unknown to himself as they are to the reader, McBain is desperate to catch the killer. He hides the truth of his past from his bosses and carries on with the investigation, all the while haunted by terrible, repetitive dreams full of blood and floating white feathers. When the truth of his omission is found out, McBain is arrested as prime suspect but soon finds an opportunity to make his escape and flees, determined to avoid the police and catch the killer before it is too late. The truth he uncovers, about himself as well as the killer, disturbs him beyond belief and McBain is forced to go face-to-face with his own past in order to settle things in the present.

With its gripping plot, that touches on the delicate and horrific subject of the long-term effects of child abuse, this book does not let you off lightly and leaves you feeling dishevelled and exhausted. If you read just one book this year, then I suggest you make it this one. Both shocking and disturbing, while at time hilariously funny, BLOOD TEARS will have you hooked. I loved it!

Amanda, you have just made my day! Thank you for the review.