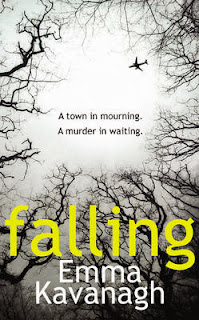 An experienced pilot, Oliver Blake, takes to the skies on a snowy night in dangerous but manageable conditions. Shortly after take-off, something goes wrong and the plane crashes. Many die, but there are a few survivors and one of these is the air steward Cecilia. Just before the flight Cecilia had decided to leave her husband Tom and two-year-old son Ben, and had already packed her belongings. Lying in hospital, recuperating, Tom comes to visit, and the crash appears to be the start of Cecilia re-assessing their relationship.

Tom is a detective constable, and just after the crash, he is asked to look into the whereabouts of Libby, a police community support officer and the daughter of Jim, a retired detective superintendent. Jim has discovered that Libby is missing from her house, and there is a trail of blood in the kitchen.

In the third strand of the story, Freya, the daughter of Oliver Blake, becomes obsessed with finding out why the plane crashed. She forms an uneasy alliance with Ian, a local reporter, who tells her that the crash may have been deliberate. Is that true? Why would her father want to crash the plane?

Slowly but inevitably, the connections between the three apparently separate stories begin to show themselves. There is some nice character development that helps to explain why and how the events unfold as they do. A good mix of 'discoveries' - discoveries of past lives and how they influence the present, and of secrets and cover-ups that cannot stay hidden for ever. A little rough around the edges, but FALLING is a confident first book with an interesting set of intertwined plot lines. Hopefully a new author that is off the starting blocks, and has more to come.