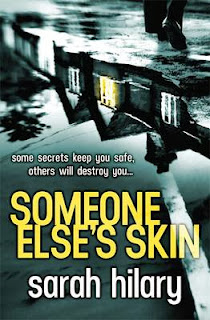 In a story that starts straightforwardly enough, DI Marnie Rome is on her way to interview a young Asian girl called Ayana Mirza, who is living in a women's refuge after her family attacked her with bleach, leaving her blind in one eye. The police want her to give a statement about what happened to her, to help show how dangerous the Mirza brothers are, and how Nasif, one of her brothers, was likely to have used a scimitar to slice off a man's hand. This is sickening violence, that needs following up. But on arriving at the refuge in Finchley, they happen upon a stabbing. Leo, the partner of one of the women, Hope Proctor, has somehow discovered the refuge, and managed to gain entry. A knife was produced and Hope then stabbed Leo in the ribs. Marnie’s partner Noah manages to save his life, with the help of Ayana. Was Hope acting in self-defence to protect herself from a violent partner? Or is something else going on? Where did the knife come from? And who is the man watching the refuge from the safety of his car? The man who writes a threatening message destined for one of the women in the refuge. Is the message meant for Simone, another scarred woman, hiding out in the refuge after a difficult childhood and a relationship with an abusive partner? And if so, why?

Meanwhile, Marnie has her own demons to contend with. A young man called Stephen, whom her parents had been fostering, after she had left home, stabbed her parents and killed them five years ago. Marnie still goes to visit the perpetrator to try to understand why he did what he did, and is desperately trying to come to terms with that horrific event.

This is a terrific first book, and one of the best first books that I've read. It explores violence, particularly against women, and its consequences with a new take on this type of violence. Marnie is an interesting, immediately likeable character and her interactions with her colleagues and friends, and reflections on her own experiences bring depth to the story. The history and fragility of the women who have experienced violence is nicely explored and with sensitivity. The plot is fast moving, and has plenty of twists and turns to keep the reader guessing, including a shocking twist that transforms the way that we think about one of the key characters. A great start, and hopefully more to come from this author in the future.

MY goodness it sounds like a cracking book. Bleak but perceptive it will be going on my to read list. With violence against women being such a big problem intelligent books addressing the issue are a must. Thanks for the review.

I agree, I will have to check this one out. Thanks for the perceptive review.