Review: Leaving Everything Most Loved by Jacqueline Winspear 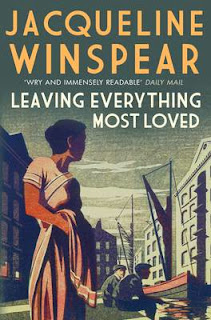 Maisie Dobbs is a private investigator living in London and this novel is based in 1933. Maisie brings her training and education to solve those cases often left unsolved by the police. In this case, a brother travels from India to ask her help in solving the murder of his sister who has been found shot through her forehead.

The more Maisie searches into the life of Usha, the more she grows concerned about the fate of Indian women brought to England by British families as cheap child care and domestic help who are often mistreated or abandoned when not needed anymore. The mystery of Usha's death starts in India and is a story of lost love and obsession.

This story engages on quite a lot of levels. It is based in the period building up to World War II, when a lot of people have not yet recovered from the trauma and loss of WWI and the beginning of the end of the Empire when many British families are leaving their quite privileged lives to return to a country changed forever. The story also covers the reasons that some people emigrated to England for a better life or to earn enough money to improve their families' lives in the country they have left behind - a topic that resonates with the present.

Maisie's interest in understanding the motivation of people's actions and the subsequent consequences makes this a much more interesting read than a pure mystery solving. The crimes in these books are always almost domestic in their scale - even though the consequences of them are terrible, often resulting in death.

Jacqueline Winspear reminds me of classic crime novelists such as Barbara Pym and Josephine Tey but also modern authors such as Sophie Hannah in her interest in the psychology of the crime and its participants. The author always provides a good read, but an interesting one and I always learn something new - but never feel that she is showing her knowledge off.

This is the tenth in the series featuring Maisie Dobbs.