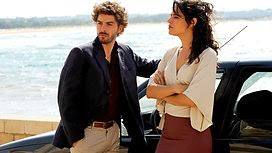 The fifth part of the six-episode run of Young Montalbano - The Third Secret - is on Saturday 5 October at 9pm on BBC Four.

Montalbano receives an anonymous note predicting the death of a local construction worker, only to realise that the note has been delivered too late. Meanwhile, the public notice board announcing the town's forthcoming weddings is stolen. What at first appears to be an innocent prank gradually turns out to have more sinister overtones. Carmine Fazio's young son Giuseppe joins the investigating team following his father's retirement, but there are minor clashes between the enthusiastic new recruit and his boss.

The series is co-written by Andrea Camilleri and Francesco Bruni with the stories drawn from several short story collections.
Posted by Karen (Euro Crime) at 8:28 pm

My husband loves this series :)