Review: An Act of Kindness by Barbara Nadel 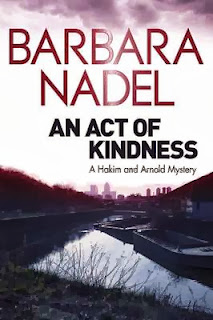 I'm a fan of Barbara Nadel's other series - the cosmopolitan Istanbul-set investigations of chain-smoking Inspector Ikmen and his friends and family, and the more offbeat books featuring the shell-shocked undertaker Francis Hancock. They're very different series, but if they have anything in common it is their depiction of multi-faith, multi-ethnic communities - and the ways in which different people get along (usually). Nadel brings the same approach to AN ACT OF KINDNESS, the second in the Hakim and Arnold mysteries set in contemporary London.

Lee Arnold is an ex-army, ex-police, recovering alcoholic Private Investigator in the London borough of Newham. Mumtaz Hakim is his veiled partner, providing a specialist service for the Muslim community.

The book opens just before the 2012 Olympics, with the apparently happy scenario of a young couple doing up a derelict house on the Strone Road. Nasreen and Abdullah are newly-weds, still living with her family while they get their new home ready. In the course of the renovations, Nasreen finds two curious things in the house. The first is a photo hidden underneath a painted metal object in the doorway. The second is a troubled Afghanistan veteran, John Sawyer, living rough in the bushes at the bottom of the garden.

Nasreen has worked with veterans before, so is sympathetic to his plight. She starts to bring John food, but hides his existence from Abdullah, who is a traditional man despite his yuppie credentials as a solicitor.

Soon, John is found murdered in the Jewish cemetery backing onto Nasreen and Abdullah's home. The police investigation is led by Lee's girlfriend DI Vi Collins, but runs into the dead ends traditionally associated with investigating the death of a homeless person. Nasreen, though, is beginning to suspect Abdullah. She asks Mumtaz to check into his background.

A parallel investigation is initiated by a converted Muslim woman who is concerned her sister Wendy is becoming a prostitute. Lee and Mumtaz discover it is worse than this - she is basically being forced into being a sex slave for her gangster-landlords the Rogers.

The two investigations intertwine and culminate in more than one tragedy.

Nadel has a warts-and-all approach to her depiction of East End gangsters and the lives of the women they victimise, so this isn't a light read, but she has an adept approach to building sympathy for her characters. For me, the mystery element was almost secondary to the more realistic and involving stories of Wendy and Nasreen. There is also clearly more to learn about Lee and Hakim, who have a touching relationship.

I must admit I haven't read book one in this series, A PRIVATE AFFAIR, but I didn't feel at all left behind. On the basis of AN ACT OF KINDNESS I'd say this is a series to follow.